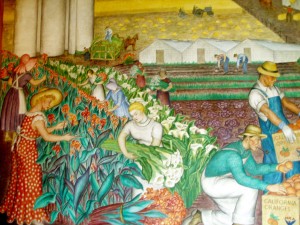 San Francisco activists are celebrating their successful campaign to protect and preserve the historic murals at San Francisco’s Coit Tower. The frescos were created under the Public Works of Art Project, the first of the New Deal federal employment programs for artists during the Great Depression.

The city-owned landmark perched atop Telegraph Hill draws some 150,000 visitors a year to its panoramic views and famous murals.

Over the years, water damage and neglect took their toll on the artwork even as millions in revenue Coit Tower adds to the city’s coffers was being spent elsewhere.

That changed after a group of local citizens formed the Protect Coit Tower Committee and advanced a ballot measure to dedicate the tower’s revenues to preserving the tower itself. San Francisco voters passed Measure B in June. The city has since earmarked $1.7 million for repairs and restoration and adopted a plan to prevent further damage.

In August activists won new rules restricting private events at the tower. Adam Gottstein, grandson of Coit Tower muralist Bernard Zakheim, argued that some activities the city permits imperil the murals. The San Francisco Board of Supervisors agreed and adopted a new policy that restricts the use of the tower in several ways, including prohibiting candles, food and drink in the mural rooms.

Watch a story on the Coit Tower murals on the PBS Newshour: https://www.pbs.org/newshour/bb/entertainment/jan-june12/fadingmurals_01-18.html