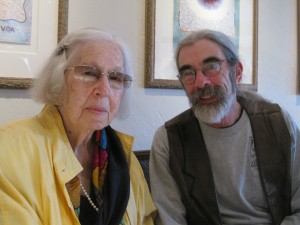 I had spoken to Beth Danysh many times over the phone but it was not until 2010 that I finally met her in person. Beth was an interior designer, a talent clearly in evidence at her beautiful home in Rancho de Taos, New Mexico.  It was my interest in Beth’s late husband, Joseph Danysh, that led me to her door.

Joe headed the New Deal’s Federal Art Project in the West, hired by Harry Hopkins, a close advisor to President Franklin Roosevelt and Holger Cahill, the National Director of the WPA’s Federal Art Project. For several years, before he went to supervise the arts program for the 1939 New York World’s Fair, Joe traveled by train through seven western states commissioning and supervising those who today are regarded among America’s finest artists.

Beth shared many wonderful memories about the New Deal artists she came to know through Joe—Beniamino Bufano, Ansel Adams, Stanton Macdonald-Wright, Lucien Labauldt and Bernard Zakheim, whom she described as a “wild man” who loved verbal sparring.

She told me that the sculptor Benny Bufano used black shoe polish on his hair. (He wanted to be sure people knew he was Italian). Bufano was a houseguest when the Danyshes lived in Carmel, California, but according to Beth, he would never sleep. She recalled that the frenetic Bufano had been commissioned to create 200-foot-high statue of Saint Francis that would overlook San Francisco from Twin Peaks, but the night before the work was to be approved, Bufano gave a talk espousing the joys of communism to the executives of U.S. Steel, from whom Joe had procured the steel for the work. “The project was cooked!” Beth recounted.

In 2010 I was co-curator of an exhibit of New Deal art at the Bedford Gallery in Walnut Creek, California. Beth generously loaned Bufano’s maquette of the ill-fated Saint Francis sculpture. It was to become a focal point of the show.

Beth said Joe considered Oregon’s Timberline Lodge his crowning glory because it was all hand made. The project required that a temporary town be built on Mount Hood to house the workers. The convergence of fine woodwork, mosaics, glass and wrought iron make the Timberline a showcase of New Deal craftsmanship. The Civilian Conservation Corps did the stonework. Joe was there for the dedication, along with FDR.

Clearly, Beth and Joe had a wonderful life together. Her stories brought to life an era so different from today. I’ll miss her grace and openness, and her wonderful stories about those whose work has come to define the New Deal.