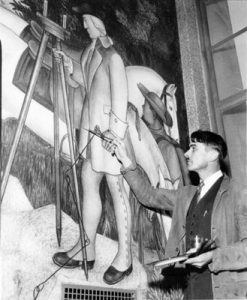 Hot on the heels of widespread demands to remove Confederate monuments come calls to remove or destroy New Deal works of art believed by some to be racist.

WPA murals in the lobby of San Francisco’s George Washington High School have recently come under fire. Painted by renowned Russian-born artist Victor Arnautoff in 1935, one of the mural panels shows Washington with his slaves at Mount Vernon; another depicts Washington pointing pioneers westward over the body of a dead Indian. African Americans and Native Americans have complained to the school district, which has appointed a special committee to decide what to do about the offending art works. Destruction is one serious option. 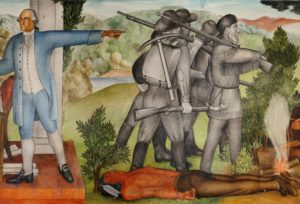 Some New Deal art can be interpreted as demeaning or even racist, but Victor Arnautoff’s daring murals, I believe, fall into a more problematic category. They depict the father of our country as also being the father of a genocide later claimed by the victors as Manifest Destiny. It is a position so contrary to the national mythology of the time that I have often wondered how the artist got away with such criticism in a public space.

Even Arnautoff’s friend and fellow left-winger, Russian artist Anton Refregier, said that he knew what had happened to the California Indians but could only go so far in his great New Deal mural cycle of California history, which he completed in 1947 for San Francisco’s Rincon Annex Post Office. Nonetheless, during the McCarthy era conservative Congressmen nearly destroyed Refregier’s murals for showing uncomfortable aspects of American history and for their implicit criticism. 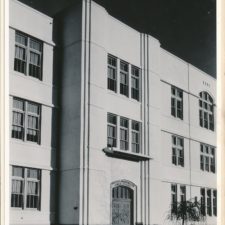 Entrance to George Washington High School
The school was completed by the WPA in 1936
Photo Credit: National Archives and Records Administration

That is precisely what Arnautoff was doing in his murals at George Washington High, but his criticism went where Refregier feared to tread. Unlike all the other colorful figures in Arnautoff’s murals, he painted the westward-moving pioneers in ash-grey and armed them with rifles and a pickaxe with which to take the mineral wealth of the fallen Indian who, unlike them, he painted in full color. Arnautoff’s pioneers represent not heroes but a death march. They march to the far right of the painting toward the signing of a treaty that their armed progress will violate, just as so many treaties with Native Americans were broken. Arnautoff is saying that the U.S. was born and grew upon bad faith and over the body of a people that had lived for ages on their land until invaders violently took it from them. 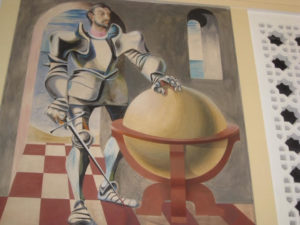 Refregier’s Rincon Annex murals were so controversial at the time he painted them that then-Representative Richard Nixon wrote to a constituent in 1949 that “I believe a committee should make a thorough investigation of this type of art in government buildings with the view to obtaining the removal of all that is found to be inconsistent with American ideals and principles.” On May 1, 1953, with Nixon as vice president, that committee met in Washington, D.C. to put on trial not only Refregier’s art but then-popular versions of history as well.

It is because San Franciscans of both parties rose up in defense of the murals, that Refregier’s works narrowly escaped destruction. Today they are regarded as masterpieces of New Deal art. San Francisco schools use them to teach about history and racial diversity, as well as conflict—themes that were hardly popular when Refregier painted them. 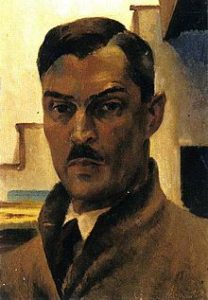 Arnautoff’s murals, like Refregier’s, offer such an opportunity to teach the power of art to encourage critical thinking and to challenge conventional wisdom.

Shortly after completing his paintings, Refregier wrote of his fear that “some night, perhaps, men will come with buckets of white paint and it will take very little time to destroy that which took me so long to make. And in the morning it will be just like it was three years ago. White walls without colors, without ideas, ideas that make people so mad and so afraid.”