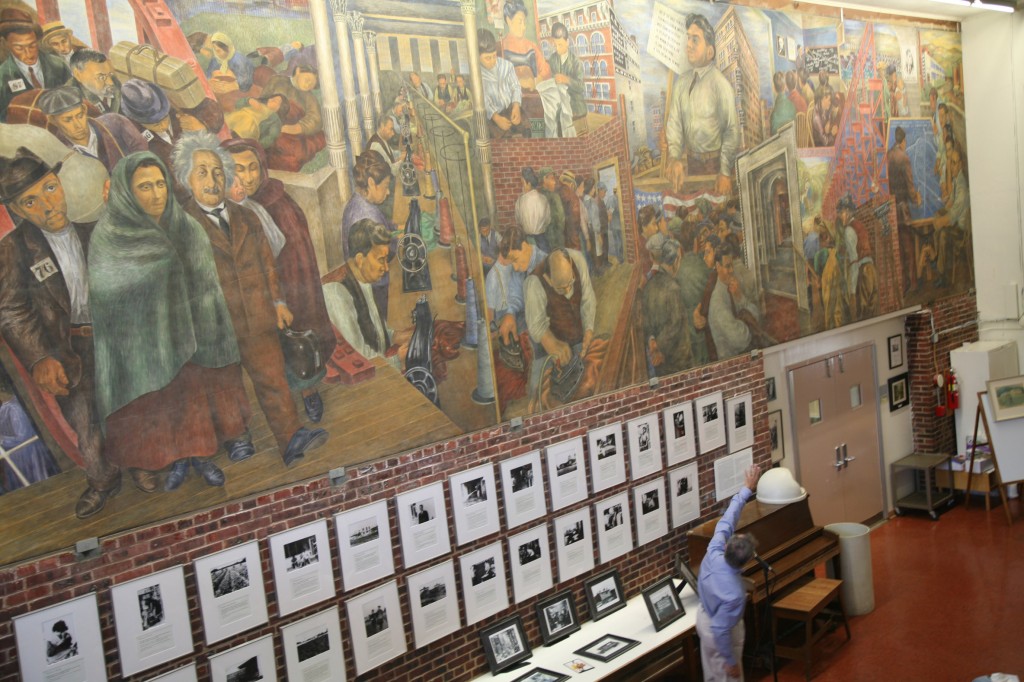 Is there room for a utopian vision in these dark economic times? A recent trip to my hometown for its 75th anniversary offered a glimpse into that possibility. Much of my weekend there was spent hearing stories of how the original New Deal vision for Roosevelt, New Jersey, had crumbled. But for me—having attended the local elementary school where a New Deal mural told a story of struggle and persistence—that possibility remains very much alive.

Originally called Jersey Homesteads and renamed Roosevelt in 1945, the tiny borough was one of 99 towns created under the New Deal’s Resettlement Administration, whose broad mission also included relocating migrant laborers as part of an effort to create employment and social stability. 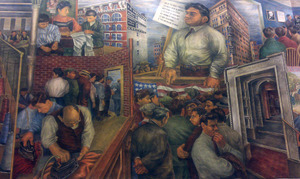 Detail of mural by Ben Shahn
A section of Ben Shahn’s mural in Roosevelt, N.J.’s elementary school depicts the plight of laborers.

Jersey Homelands also was a social experiment among largely working-class Jewish immigrants in creating a collectively managed community; it was the only Jewish resettlement town. Many of the first residents had fled Eastern Europe in the ‘teens for places like Brooklyn, New York and Philadelphia. When they left the city, it was to found what they called an “agro-industrial cooperative.” It was a dream propelled by town founder Benjamin Brown, a Russian immigrant who devoted much of his life to establishing Jewish agricultural cooperatives.

A culture of political organizing permeated the town in its early days. Over the 75th anniversary weekend one member of the original settlement recalled the seemingly endless march of organizational meetings in which his parents took part. He said he would fall asleep to the voices of adults debating–only to wake up the following morning to hear them still at it!

The cooperative experiment did not last long. The garment factory, farm and store that were Jersey Homestead’s economic base transferred to private ownership, and many residents sought work elsewhere or moved away. Some blame disagreements among settlers, but the stories vary.

What has lasted is a concern for preserving the town’s generous open space and unusual architecture. Preservation fights beginning in the late 1990s kept the town’s greenbelt from succumbing to cookie-cutter suburban development. The Bauhaus-inspired, flat-roofed-cinderblock homes always seemed misplaced, given New Jersey’s cold, wet winters. Still, many current residents have retained the Bauhaus feel of their homes.

Roosevelt’s 884 contemporary residents include a thriving artist community through which the town maintains some of the leftward tilt of its original residents. Perhaps it helps that the Roosevelt Public School still boasts the amazing mural by New Deal artist Ben Shahn, whose family lives in town. Depicting the town’s founders and one of its most famous supporters—Albert Einstein—the 1937-38 mural shows attacks on progressive political models while recording the town’s utopian aspirations.

[Editors note: An earlier version of this article incorrectly indicated that Albert Einstein lived in Roosevelt. He was a political supporter of the town, which is about 16 miles from the Institute for Advanced Studies in Princeton, NJ, Einstein’s academic home until his death in 1955.]
Rachel Brahinsky is the Living New Deal's managing director and postdoctoral fellow.
Email | View all posts by Rachel →