A post office mural rescued by a high school history teacher and restored through the contributions of scores of citizens has returned by public view after more than 40 years.

“Indians Cede the Land” by George Melville Smith was installed at the Park Ridge, Illinois Post Office in 1940. It remained there until 1970, when the building was sold. Learning that the mural was slated for destruction, teacher and history buff Paul Carlson enlisted two of his students on a rescue mission. They sprayed the mural with varnish, pried it off the wall, and removed it to Mr. Carlson’s home. On Mr. Carlson’s death in 2008, his family delivered the mural to the Park Ridge Public Library. It took several years to secure the funds for restoration—a number of local organizations and individuals contributed—and Parma Conservation completed the job this year. The mural was unveiled in a ceremony at the Library on February 22, 2013. 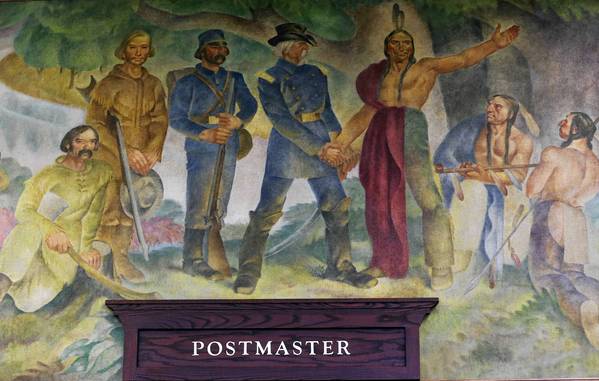 “Indians Cede the Land” is an oil-on-canvas mural that portrays, in a symbolic way, the acquisition of the lands around Chicago from local tribes in the early 1800s. Smith won the commission from the Treasury Section of Fine Arts after painting murals for two other local post offices and an elementary school.  His career is an emblematic one for New Deal artists: He studied art at night school, worked as a commercial artist, spent some time in Europe, exhibited at the Art Institute, got some exposure at the Century of Progress fair in 1933, and joined the Illinois Art Project of the WPA as soon as it was created. Although he was primarily an easel painter, Smith became the supervisor of the WPA’s applied arts project.

The Park Ridge Public Library has produced a nice pamphlet about the mural and the restoration effort. More information is available at www.parkridgelibrary.org.