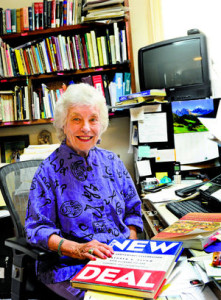 Kathy, a long-time New Mexico resident, grew up in Texas amidst the Dust Bowl. Her public service career included working as a reporter, a hospital administrator, and civil servant. Her job as Deputy Secretary of State sparked her interest in the New Deal. She later founded the NNDPA in order to document and preserve the New Deal’s legacy.

New Mexico is exceptionally rich in New Deal history. Courthouses, post offices, libraries, hospitals, theaters, schools, and more, were built in cities and small towns throughout the state. During the Great Depression, more than 50,000 New Mexicans got work with the Civilian Conservation Corps. Kathy tracked down and interviewed all the New Mexico CCC members she could find. She also set out to recover New Deal murals and other artworks that had gone missing or been painted over. She authored three books about the state’s New Deal history, art, and architecture.

Kathy has raised awareness of the New Deal through advocacy, education programs, commemorative events, and tours. She recently hosted a public forum that brought several descendents of the original New Dealers to Santa Fe to share memories of their famous families and their achievements—Nina Roosevelt Gibson, the granddaughter of Franklin and Eleanor Roosevelt; David Giffen, the great grandson of Harry Hopkins who was head of the Works Progress Administration; Tomlin Coggeshall, the grandson of FDR’s Labor Secretary Frances Perkins, the first woman to serve in a presidential cabinet; T.J. Walker, the grandson of Frank Walker, an FDR confidante who coordinated the New Deal agencies; and David Douglas, the grandson of Vice President Henry Wallace, who also served as FDR’s Secretary of Agriculture.

Last fall, the NNDPA’s archive of articles, books, and ephemera of the New Deal that Kathy had assembled over decades became part of the permanent collection at the John Gaw Meem Library at the University of New Mexico in Albuquerque. Last spring, Kathy was named “One of Ten Who Made A Difference,” an annual award presented by the Santa Fe New Mexican, and was honored by Santa Fe Living Treasures, a nonprofit organization that recognizes elders who have generously served their communities. Kathy’s oral history will be soon be available to the public at the Fray Angélico Chávez History Library in Santa Fe.