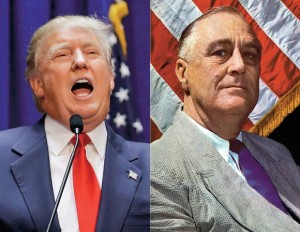 One of the many unknowns of Donald Trump’s impending presidency is the fate of America’s New Deal legacy. Last Tuesday, Newt Gingrich spoke before the Heritage Foundation in a wide-ranging speech celebrating Trump’s victory and the social, economic, and cultural changes it seemed to auger.

Gingrich’s speech centered on his vision of an America gutted of New Deal programs, not to mention ideals. As Ian Millhiser writes for ThinkProgress, the former Speaker of the House exclaimed, “this is the third great effort to break out of the Franklin Delano Roosevelt model.” He pontificated that if a Trump presidency is followed by another Republican administration, the “FDR model” would be done for. Ambitious infrastructural projects promised by the president-elect may resemble New Deal efforts, but would likely have little in common with the mass job generating, civic minded public works of the New Deal.  And, no doubt, the liberal social programs that went along with them will have little place in any new iteration of government stimulus projects.

Gingrich may be more of a spiritual advisor to Trump than anything else. Still, as Millhiser notes, “Early signs suggest that Gingrich’s predictions that Roosevelt’s legacy could be undone should be taken seriously. Republicans in the House hope to cut Social Security benefits by 20–50 percent. [House] Speaker Paul Ryan’s plan to voucherize Medicare would drive up out-of-pocket costs for seniors by about 40 percent. Then he’d cut Medicaid by between a third and a half.” And despite Trump’s campaign promises to protect the social safety net, his recent cabinet choices suggest that his agenda will align with that of Speaker Ryan.

America appears to be far, far away from the kind of new New Deal that those who remember President Franklin D. Roosevelt’s legacy have envisioned for the country