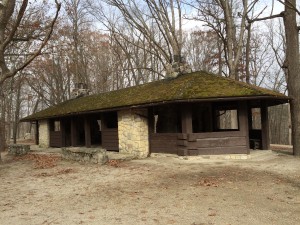 In the early 1990s I was approached by an older gentleman named Euclid Dearing, a veteran of the CCC in Indiana, to write a National Register nomination for the Hominy Ridge shelterhouse in Salamonie River State Forest. He was a member of Company 589, which had originated at McCormick’s Creek State Park. After completing a number of projects there, in 1935 the company was assigned to a new camp in the northeastern part of the state in what was to become a state forest.

The majority of Indiana’s state forests were developed in the 1930s by the CCC, often from played-out farms or on terrain too difficult for agriculture (although that did not stop people from trying). Salamonie was no exception. The mission of the state forests differed from that of the state parks. State forests were intended as tree reserves, plantations, and places for silviculture experimentation. However, as the trees were going to be there for awhile, the Department of Conservation added a secondary recreational mission and oversaw the building of picnic groves and shelters in portions of the forests.
Typical of these in Indiana, the Hominy Ridge shelterhouse sits amidst an oak grove surrounded by stone-and-timber picnic tables. When I wrote the nomination, a pump with a stone base was still present; today there is only a remnant, along with the stone foundations of the pit toilets that were removed decades ago. Still, the site, high above the Wabash River, is largely intact and lies adjacent to a dam built by the CCC that impounds an 11-acre lake. The shelterhouse boasts two huge stone fireplaces that face inward; on their opposite sides are stone grills that serve the five-sided porches at each end. The building’s footprint is an elongated octagon. There are a few other CCC-built shelters of this interesting style, all in state forests or on properties that had been state forests.
Arsonists burned the Hominy Ridge shelterhouse in the early 2000s, but the Indiana Department of Natural Resources opted to restore it–rather than simply build anew, as had been more their style in the past–and they did a fine job. In the past two decades, DNR has come to realize and celebrate its New Deal resources.
Glory-June Greiff is a public historian based in Indianapolis. She has been researching the work of New Deal for 35 years.
Email | View all posts by Glory-June Greiff →