On October 23, Richard Walker will speak about the Green New Deal at the Commonwealth Club in San Francisco. Titled, “New Deal To Green New Deal” the talk will address how the lessons of the New Deal can be useful… read more 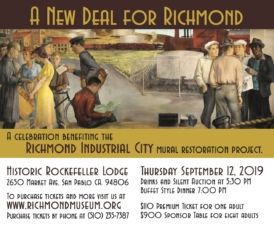 While controversy continues about one famous artist’s mural at a San Francisco high school, an East Bay museum is determined to restore another valuable work by the same person. The Richmond Museum of History unearthed the mural, “Richmond Industrial City’… read more 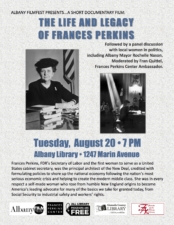 Tuesday, August 20, the Albany Filmfest will presents a short documentary film titled, “The Life And Legacy Of Frances Perkins.” The screening will be followed by a panel discussion with local women in politics, including Albany Mayor Rochelle Nason. Moderated… read more 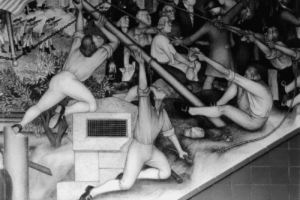 In July, a panel of historians will discuss the controversy over the George Washington High School Victor Arnautoff murals, which some have interpreted to promote a narrow, Eurocentric view of history. This panel will open with a brief visual… read more

The symposium will take place from 6:00 to 8:00 p.m. at the Center for Architecture, 536 LaGuardia Place, in Manhattan. The event is free and open to the public, but is now over-subscribed. Author Kevin Baker will deliver the keynote… read more

Gray Brechin will give a talk for the Metropolitan-Greater Oakland Democratic Club, titled “New Deal Public Works as a Model for the Green New Deal.” The talk will take place on May 21, 7:30 PM, at the Montclair Presbyterian Church.