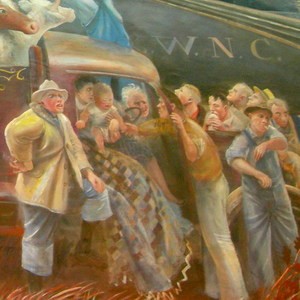 A fixture of the mid-century Woodstock arts scene, Wendell Jones painted four murals for the New Deal’s Section of Fine Arts. His works were admired by government officials and his peers alike, including Philip Guston.

From June to October 2014, the Woodstock Artists Association and Museum held the first major retrospective of Jones’s work since the 1950s. Rediscovering Wendell Jones, 1899-1956 showcased an artist conformable in a range of forms: His sunbaked Southwestern cityscapes, his cluttered and overcast Hudson Valley landscapes, abstract expressionist paintings from the 1950s. The exhibit also presented the four New Deal murals Jones was commissioned to paint in the Midwest and the South. The Living New Deal has previously marked Jones’s work on our map. But only recently did Peter Jones hear about us and reach out to let us know about this major exhibit of his father’s work. Peter Jones was generous enough to send us the accompanying catalogue. This slim volume beautifully captures the variety of Wendell Jones’s paintings, and features a foreword by Josephine Bloodgood, the Executive Director and Curator of the WAAM’s Permanent Collection, and an introduction by Peter Jones that draws together personal memories and extant scholarship. There is also a helpful chronology of the artist’s life, vivified through photographs from the family collection. The result is a sense of Wendell Jones’s work in the context of his own personal and creative development, as well as his devotion to New Deal civic-mindedness.

Indeed, Jones’s New Deal murals display a range of moods and circumstances. If Jones’s paintings for the Section of Fine Arts are unified by the theme of collective work, their subject matters traverse eras and moods. First Pulpit in Granville, painted for the Granville, Ohio, post office in 1938, is a lush, densely packed historical epic of community building through the religious revivals of a century earlier, its figures bathed in light. Indeed, Jones believed, according to art historian Karal Ann Marling, that depictions of local history “could stir up in local residents a feeling of pride in their present circumstances, because such events were a part of local consicousnes, in which the aspirations of forefathers and descendants met.” Farmer Family, painted for the Johnson City, Tennessee, post office in 1940, illustrates vigorous industrial and rural work among Johnson City’s inhabitants—train conductors, construction workers, dairy farmers, and lounging workers in overalls smoking, eating, debating. So much activity clustered together, with little room to breathe. One wonders, in this painting, if “family” is a word whose meaning is symbolic.

Jones’s work is currently housed in private collections, as well as the Frances Lehman Loeb Art Center at Vassar College, the Hood Museum of Art at Dartmouth, and the de Young Museum in San Francisco. In order to purchase the catalogue to Rediscovering Wendell Jones, contact the Woodstock Artists Association and Museum.