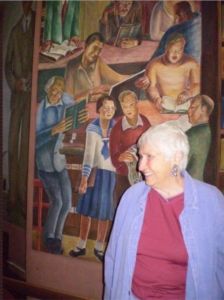 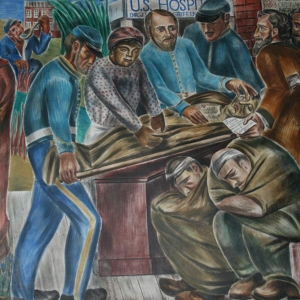 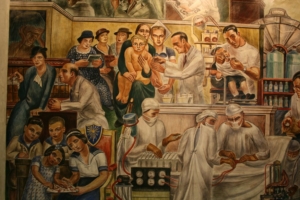 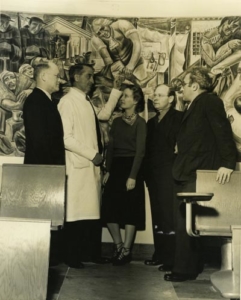 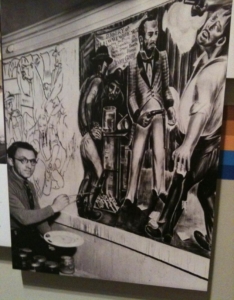 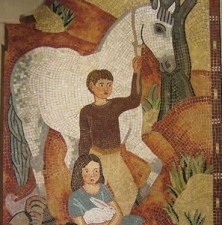 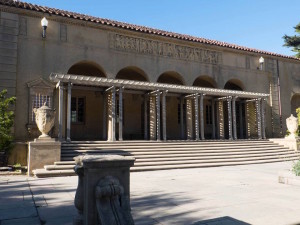 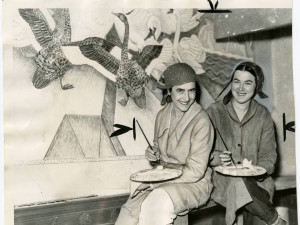 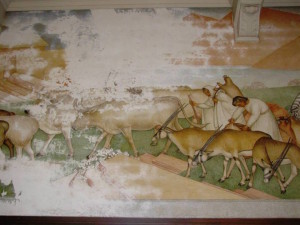 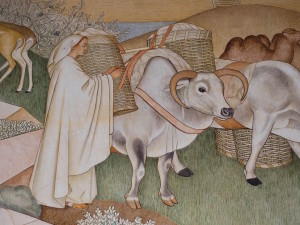 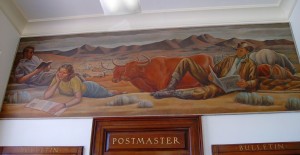 This is definitely NOT a tall tale. In 1939, Bay Area artist Jose Moya del Pino entered the Treasury Department Section of Fine Arts competition for the post office mural in San Antonio, Texas. Depicting the Alamo and Sam Houston, he hoped to win the commission, but it was not to be. As consolation he won the commission for the newly built post office the small West Texas town of Alpine with his entry, “View of Alpine.” When he got word of his commission, Moya could not travel the 1,400 miles from his San Francisco studio to do his research, so he wrote to the local postmistress for help. Promotional materials on Alpine, describing itself as “the biggest town in the biggest county in the biggest state in the union,” became his sources.

Moya’s initial pencil sketch presents the central theme: the benefits of the post office to local Sul Ross College students and cattle-raising residents through books. The sketch includes the nearby landscape, college campus, cattle, and horse. Further in the process, color was added and details of the local landscape took shape. For the cowboy, Moya found inspiration in California, recalling in his oral history, “There was a fellow that lived around here, Mr. MacNear, who had a $40 hat, a Texas hat, and boots. I asked him if he would pose for a mural, and he said he would.” 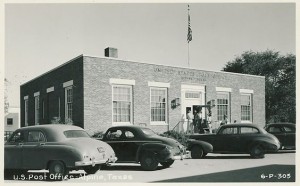 Moya completed the mural in oil and accompanied the work to Alpine for the 1940 installation and unveiling. In his oral history, he recalled the local reaction,

“Oh, they were pleased. Some of the old-timers came to the installation and made a lot of comments. They would say, ‘Mr. Artist, I think it’s very good, your mural. Those hills, they are just like the hills of Alpine.’ Then a couple of students who studied at the college came and said, ‘But you know, one thing that is very wrong. You put a cowboy reading a book. And a herd of cattle so near the cowboy. That would never happen in Alpine, never. A herd of cattle never comes into town. They stay in the distance, long out in the range.’ And there was criticism like that.”

Alpine is still many miles from a big city, but it has enough attractions for a top ten list in the February 12, 2015 edition of Texas Monthly. The old post office is now the Brewster County Appraisal District office, but the mural remains, attracting tourists on the lookout for the Living New Deal.

Quotes and background information on the mural are taken from the Oral history interview with Jose Moya del Pino, 1964 Sept. 10, Archives of American Art, Smithsonian Institution at http://www.aaa.si.edu/collections/interviews/oral-history-interview-jos-moya-del-pino-12903 .