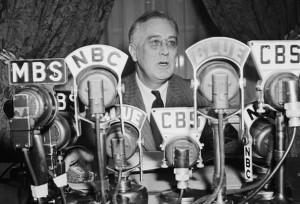 FDR delivering one of his fireside chats.
In thirty “fireside chats” he delivered between 1933 and 1944, Roosevelt appealed to radio listeners for help getting his agenda passed.

To understand just why Franklin and Eleanor Roosevelt enjoyed such popularity despite the enmity of the nation’s Republican press, you can read their speeches, but better far to hear their voices. NPR recently aired an audio documentary by American Radio Works titled The First Family of Radio that reveals a little-known facet of the First Couple’s remarkable political partnership by weaving together excerpts from many of their broadcasts.

As one commentator notes, FDR was a natural at utilizing the new medium of radio to reach out to Americans as if he was chatting with them by their firesides. Usually beginning with and punctuating his speeches with “my friends,” FDR explained in simple and direct terms complex topics ranging from how the banking system works to what his administration was doing to fight the Depression and then the war. Less known is that Eleanor used radio far more than her husband did to advance the objectives of the New Deal as well as those causes to which she was committed — world peace, civil rights, and above all moral courage. 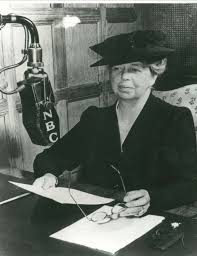 The First Lady on the air
Eleanor Roosevelt is remembered for her newspaper column, “My Day,” but she reached millions through her weekly radio address.

Unlike her husband, however, Eleanor was not a natural as a clip of one of her first broadcasts demonstrates when she fairly shrieks into the microphone. Voice coaching taught her how to drop her voice and to modulate it almost as skillfully as her husband. Both Roosevelts never lost their patrician, mid-Atlantic accents, nor did they need or try to. Indeed, that accent may have been a subliminal key to their success for they projected that they were both friendly neighbors and benign parents. Their voices brought millions as virtual guests into the White House of which FDR once said “I never forget that I live in a house owned by all the American people and that I have been given their trust.”

The most remarkable speech for me was one that Eleanor delivered shortly after the White House learned that the Japanese had bombed Pearl Harbor. The day before FDR delivered his famous “Day of Infamy” speech, Eleanor was preparing for her weekly radio show across the hall from where the president and his advisors were consulting. She pivoted on a dime and, at 6:45 in the evening, spoke to the nation about the ordeal ahead.

She addressed other mothers as a one who herself had “a boy at sea on a destroyer” (and soon would have three others in combat.) With unwavering determination, she rallied Americans to help one another, concluding “I feel as if I was standing on a rock, and that rock is my faith in my fellow citizens.”

In his 1936 nomination speech, Franklin Roosevelt proclaimed that his was a generation that had a rendezvous with destiny. Through their radio addresses, both Roosevelts ensured that destiny was met.

This anthology, edited by Sheila D. Collins and Gertrude Schaffner Goldberg, compares the two administrations on banking, jobs, agriculture, the environment, labor, social movements, welfare, culture, and the economy. It documents the similarities and differences between the two presidencies in the context of the political skills of each president, the available channels of communication and his ability to use them, the strength and composition of his party, the interest groups and social movements aiding and opposing him, and other environmental, cultural, and international factors that each faced.

Several common themes emerge. One was Roosevelt’s superior ability to use language evoking traditional American values to explain to the electorate what was happening to them and what his policies were intended to accomplish. Obama’s “soaring rhetoric” was no substitute for the ability to articulate policy in ways that would forge alliances and win over adversaries.

Another was Roosevelt’s vision of the interrelationships of problems, which allowed him to devise policies to combat economic, social, and ecological disasters simultaneously.  The Civilian Conversation Corps and the Tennessee Valley Authority are just two examples. Obama’s Affordable Care Act may one day come close to matching the multiple impacts of these policies, but his stimulus effort fell far short.

Another was the utility of radical movements to Roosevelt’s left. These multiple groups of dissenters struck enough fear in the hearts of New Deal opponents that they accepted Roosevelt’s “slightly-left-of-center” programs rather than risk getting something far worse.  Obama, of course, cannot be blamed for not having enough enemies on the left to frighten the right into compromise. He might, however, have gotten further by paying more attention to advocates of “the public option” in health reform and less to placating Republicans.

The greatest contrast between the presidents is in the area of job creation. The New Deal spawned a dozen programs that created public jobs. Roosevelt stimulated the demand side of the economy, not the supply side so beloved by Republicans.  In contrast, Obama did not believe that the public sector could create jobs. In this he is clearly a Hooverite. And his pitiful stimulus effort showed it.

Though I have emphasized Roosevelt’s successes, this book is no hagiography.  It is as alert to the failures of the New Deal as to Obama’s missed opportunities. There is still time to learn from both.

is Professor Emeritus, Arizona State University and currently a Visiting Scholar at the University of California, Berkeley. He is the author of Long Range Public Investment: The Forgotten Legacy of the New Deal. He serves on the Research Board of the Living New Deal.
Email | View all posts by Robert Leighninger →