In addition to the economic calamity of Great Depression, in the 1930s the country was further beset by environmental catastrophes such as floods, hurricanes, drought and a Dust Bowl, much as it is today. But in addition to Franklin and Eleanor Roosevelt, the nation had something else then that it does not have in 2012 to deal with devastating storm events such as Hurricanes Katrina, Irene and Sandy. 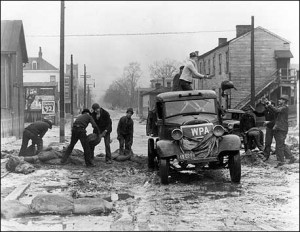 WPA and CCC workers were trained in disaster aid and recovery. In the event of natural disasters, tens of thousands of men and women could be quickly moved to affected areas to supplement the National Guard and other emergency workers.

The Work Projects Administration produced an 11-minute documentary titled “Shock Troops of Disaster” that includes dramatic footage of the extraordinary damage caused by the epic 1938 storm in New England as well as the recovery effort by federal workers. It is well worth watching today. In the wake of Hurricane Sandy, it’s a vivid reminder of the vital role of federal government in disaster relief.