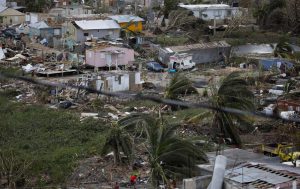 Over a month after Hurricanes Irma and Maria, Puerto Rico remains devastated from the damage inflicted, with much of the island still without power.  In the aftermath of the storms, there has been some discussion of implementing significant public investment in Puerto Rico, in the spirit of the New Deal programs.

An article in The Nation, written by Ed Morales, advocates for an investment akin to the aid Roosevelt provided after the island’s deadly hurricanes in 1928 and 1932.  After those storms, “Roosevelt established the Puerto Rico Reconstruction Administration, which created jobs, built schools and medical facilities, expanded the university, and enhanced the electoral infrastructure.  Today’s monumental debt, an outgrowth of neoliberal excess, should be resolved with some version of the plan proposed by Bernie Sanders in his 2016 campaign: The Federal Reserve should buy back the debt from bondholders and deny the vulture funds a profit, imposing the kind of severe ‘haircuts’ that the current Title III bankruptcy proceedings are unlikely to require.”

Another article in In These Times, written by Kate Aronoff, notes that the 1928 and 1932 hurricanes decimated Puerto Rico, killing more than 300 residents, and leaving 500,000 homeless.  The Puerto Rico Reconstruction Administration (“PRRA”), which lasted until 1955, “sought to address longer-term issues like infrastructure development and entrenched poverty.”  As a result, “[b]y the late 1930s, Puerto Rico had the highest rate of school enrollment in its history,” and “[f]or some parts of the commonwealth, the schools constructed by the PRRA were the first ever.”  To prepare for future storms, “the PRRA worked with architects and engineers to construct thousands of concrete houses that could withstand hurricane-force winds—as many did just recently during Maria.”  Perhaps most importantly, “the PRRA created massive numbers of jobs. Unemployment in 1934 had swelled to around 350,000 people, affecting an estimated three-quarters of the island. Four years later, the number of people unemployed had dropped to 150,000, with the program directly having put tends of thousands of people to work each year. In September 1936, there were 51,749 people working on PRRA projects.”

Source: Aronoff, Kate. “How Puerto Rico Recovered Before.” In These Times, September 26, 2017.