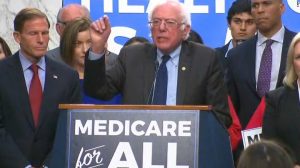 Sen. Bernie Sanders (I-Vt.) and 16 of his Democratic colleagues introduced legislation on September 13, 2017 to guarantee health care to every American by expanding and improving Medicare.  The Medicare for All Act of 2017 would establish a national health insurance program called the Universal Medicare Program. Under this legislation, every resident of the United States would receive health insurance through an expanded Medicare program with improved and comprehensive benefits.

Over 80 years ago, Roosevelt too viewed universal health care as a critical goal.  In fact he had originally sought to include national health insurance in his Social Security legislation, but decided that it was too ambitious an agenda at the time.  Nevertheless, his administration actively pursued the issue.

Even after the nation entered World War II, Roosevelt continued to advocate for universal health care, “propos[ing] that Social Security be expanded to include hospital insurance, as well as temporary and permanent disability benefits. Though the country was still emerging from the Great Depression and drastically increasing spending on the military, FDR told Congress that guaranteed, universal health care was unquestionably affordable:

‘Our resources are such that even with the projected huge war expenditures we can maintain a standard of living more than adequate to support the health and productivity of our people.’

In his Jan. 6, 1945 State of the Union Address, as the end of the war was in sight, he indicated he was ready to enact universal health care:

‘In considering the State of the Union, the war and the peace that is to follow are naturally uppermost in the minds of all of us … An expanded social security program, and adequate health and education programs, must play essential roles in a program designed to support individual productivity and mass purchasing power. I shall communicate further with the Congress on these subjects at a later date.'”