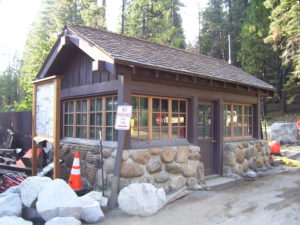 Multiple New Deal agencies were involved in work of various kinds in the transformation of this narrow and dangerous wagon trail into a safe and comfortable route into Yosemite Valley. The route from the South Entrance to the Valley floor is 27 miles.

The National Park Service and the Bureau of Public Roads (U.S. Department of Agriculture) signed a Memorandum of Agreement in July 1925, authorizing the planning and construction of new roads within Yosemite National Park. Surveying was begun in 1928. Initial construction was finished by 1933.

A Written Historical and Descriptive Data, Historic American Engineering Record of the National Park Service describes the construction of the road: “Construction had necessitated many roadside cuts and much grading work which had adversely impacted the landscape. To offset the damage, Park Superintendent Thomson issued instructions for a replanting program; this project was carried out under the direction of Dr. F. E. Clements, ecologist for the Carnegie Institution. Seeds were collected by Emergency Conservation Work personnel, and the planting work was done by the Civilian Conservation Corps.” “Park planners were so concerned about the new road’s appearance that they ordered CCC workers to paint the rock cuts and ledges around the Wawona Tunnel in an effort to conceal the newly exposed rock surfaces. The cuts, as well as the tunnel’s concrete west portal, were sprayed with a mixture of lamp black, mineral spirits and linseed oil. […]

The Mariposa Grove Road was paved in 1933 to allow for snow removal during winter, opening the grove as a year-round attraction. The work began on October 9, using Public Works Administration funds. The Granite Construction Company of Watsonville, California provided rock for the road base from its crusher, which was located near Wawona in the bed of the South Fork of the Merced. The asphalt coating was placed by the American Bitumuls Company. The project also included landscaping work, including the planting of some young sequoias, and the filling of the borrow pit. Work was completed in the fall of 1934 at a cost of $15,275.”

According to a HAER No. CA-148 report: “In 1934, roads around the South Entrance station were realigned and a parking area for thirty cars was constructed just inside the entrance. The parking spaces were originally set off by a redwood rail, since removed. The old checking station was removed at the same time. Public Works Administration funds were used for the project. At the Valley end of the road, a new parking area at the base of Bridalveil Fall was constructed and paved in late spring and summer of 1935.97 The south entrance layout was revised again in 1939 or 1940 and a new checking kiosk was added. This was replaced in 1958 by a Mission 66 era structure which still stands.”

A detailed description of the park facilities located on Wawona Road can be found in A Sense of Place Design Guidelines for Yosemite National Park (2012): “The South Entrance Station is about one mile north of the park boundary on the Wawona Road, at an elevation of 5,150 feet. In July 1934, federal relief funds became available to build the South Entrance Station, a comfort station, and nearby housing for the rangers employed year-round in the Wawona District. The buildings were all constructed using locally available materials and were designed to blend harmoniously with the setting. The buildings are set on a gentle southwest-facing slope in a dense, mature, lower montane coniferous forest. They consist of a restored entrance station building, a ranger residence, a comfort station, and two non-historic fee kiosks.

The ranger residence is a wood-frame structure, approximately 36 feet by 68 feet, with two separate living quarters. The exterior steps and the foundation of the structure are made of rubble masonry. Workers transported the stone and sand needed to build the steps and foundation some six miles from the Wawona Basin. Originally, the gable roof was covered with shingles that were hand-brushed with a green creosote shingle stain. Today it is a standard cedar shingle, weathered a dark grey. A porch is at each end of the structure. The asymmetrical gable on the south elevation is worth noting. A garage was also constructed at this time, sited uphill at the end of a narrow drive to the rear of the residence. The garage structure also has a stone foundation and a gable roof. The comfort station, measuring approximately 19 feet by 32 feet, is adjacent to the entrance kiosks on the east side. The wood-frame building has bevel redwood siding and a gable roof. The foundation consists of the same rubble masonry from the Wawona Basin—specifically from the bed of the South Fork of the Merced River” 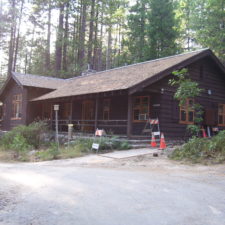 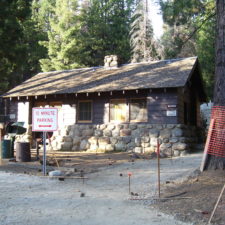