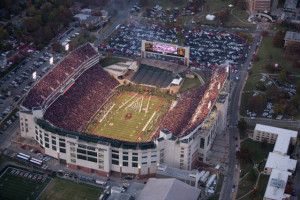 Multiple substantial building projects were undertaken on the University of Arkansas campus in Fayetteville during the Great Depression. The federal Public Works Administration (P.W.A.) was responsible for an enormous amount of that new development at the time. However, the Works Progress Administration (W.P.A.) contributed as well. The W.P.A. built a new stadium for the fledgling institution. Now known as Donald W. Reynolds Razorback Stadium, the venue has served as the home for the University of Arkansas Razorbacks since its opening in 1938.

A 1940 W.P.A. document described the need and benefits of the new stadium:

Because of the suddenly acquired national fame of the University of Arkansas’s football “aerial circus,” this stadium has proved a drawing card in itself. While not comparable in size to some of the Southern stadia, its setting in the Ozark mountains makes it a rare sight. Attendance at home games has materially increased since its construction since the old one was not in any way suitable for demands upon it.

One comment on “University of Arkansas: Razorback Stadium – Fayetteville AR”

View all projects at University of Arkansas - Fayetteville AR (9 Projects)