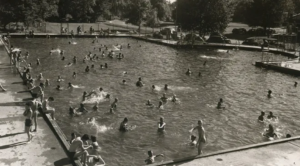 The Works Progress Administration (WPA) built a swimming pool in Greenville’s Cleveland Park between 1939 and 1940.

The city officially dedicated the pool on June 26, 1940. The total cost of the project amounted to $63,000. Children paid a dime to swim. The pool was but one of several WPA-sponsored projects in Greenville during the Depression, including park improvement and landscaping proposals.

In 1961, the NAACP filed a lawsuit targeting segregated recreational facilities, including the Cleveland Park Pool. The following year, courts ruled that segregated park facilities were indeed unconstitutional, and the pool shut down for good in 1963. The city council attempted to transform the pool in various ways before filling it in and converting it into a rose garden.