A “communistic” New Deal mural unseen for over 50 years may soon re-appear. Officials at Roosevelt Alternative High School in Rockford, Illinois, are consulting with an art restorer about uncovering the large painting by local artist Herbert Rosengren, created in 1934 under CWA sponsorship. Upon installation the work was described as celebrating “labor in harmony,” but a few years later the local American Legion criticized it for showing “shackled labor, a communistic implication,” and attempted to have it removed. This effort failed but less than ten years later, around 1942, the mural was covered up.

Old photos show a work in full social-realist style—muscular men swinging hammers (CWA workers posed for the artist) are surrounded by vignettes of marchers threatened with bayonets, looming skyscrapers, and “upraised arms shackled at the wrist.” 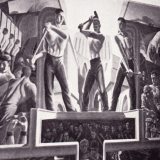 In one corner is a wheat field that the School Superintendent compared to “those one sees on posters sent out by the soviet republic.” (He subsequently acknowledged that “all wheat fields look pretty much alike whether in the United States or in Russia.”)

The Roosevelt School archives contain a unusually complete record of the controversy that raged during the first few months of 1936. The Mayor and the School Superintendent conferred, temporized, and appointed a committee. The artist, in a rather disingenuous interview, said that the mural was so patriotic that it  “could be found fitting for display in an American Legion hall” and called his critics “stupid and un-American.” The Artist’s Union in Chicago fired off a telegraph protesting against “censorship.” The local Communist Party took offense, claiming that “as communists we disclaim that it has any connection to our aims.” When the Superintendent worried that the mural could make children “riled up and stirred up,” a newspaper interviewed some students and reported that they liked the mural and were “not unduly oppressed” by its subject matter.

The Rosengren mural survived this controversy. In March of 1936 the committee reported that the painting was “fitting and proper,” but recommended  that an explanatory plaque be placed nearby. (Let’s hope that the plaque is recovered along with the mural.) Ten years later, though, it succumbed under circumstances that are not known.

Assistant principal James O’Hagan is leading an effort to document the mural’s history and restore it to view. “Friends of the Roosevelt School Mural” are sharing information through Facebook.

Recovering this emblematic piece of art and with its all-too-emblematic story would be a victory in the effort to keep the legacy of the New Deal alive.