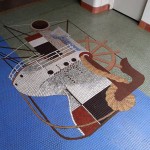 During a recent restoration of the old terminal at Long Beach Airport, mosaics by artist Grace Clement were discovered under old carpeting.  The floor mosaics were contracted for by the Works Progress Administration in 1941, and are part of larger series of art works by Clements throughout the airport.  The restoration work was part of a project to expand the terminal facilities.

See the full story in the Long Beach Press-Telegram, November 29, 2012.  For more on the mosaics, see the site listing in the Living New Deal database and map.