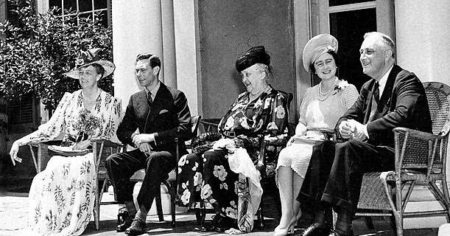 The Picnic
A special bond between FDR and the Royal couple played a significant role in US-UK relations during the war years that followed. Credit: potus-geeks.livejournal.com/1107940.html.

On June 11, 1939, as war loomed over Europe, King George VI and Queen Elizabeth, The Queen Mother, joined FDR and his staff at the president’s Hyde Park, New York, residence. The menu of that day included “Hot Dogs (if weather permits).” The American delicacies, along with beer, were served on a silver tray. The Royal couple reportedly asked Roosevelt how exactly one was supposed to properly eat a hot dog.  “Very simple,” FDR retorted. “Push it into your mouth and keep pushing it until it is all gone.”

With thanks to Claire Barrett, History.net.