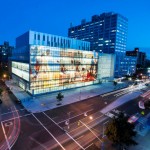 WPA murals at Harlem Hospital Center had all but disappeared, but were rediscovered during a major renovation in 2004.  The murals in question were among some 500 murals in New York City funded by the Federal Arts Project arm of the Works Progress Administration.  What is more, these were probably the first New Deal projects awarded to African American artists, and they were controversial in their time for depicting ‘too much Negro subject matter’.  Now the murals have not only been restored, they have been moved to a dedicated gallery  visible from the street and enlargements of three of the murals are printed on the building’s glass facade – a block long and five stories high!   The full story is available at the New York Times website.