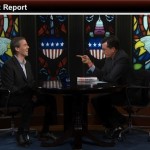 Michael Grunwald, author of The New New Deal, defended New Deal politics in conversation with Stephen Colbert this week. Colbert, through the voice of his right-wing avatar, confessed that the New Deal gave “hope to a shattered country.” Grunwald offers a comparison between then and now; he defends the 2009 Recovery Act, but says we don’t hear the story of its success because of the way it was carried out. Watch it here — Colbert Report: Sept 5, 2012