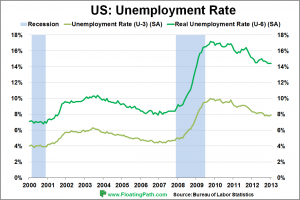 The government and the news media would like us to believe that the recession triggered by the financial crisis of 2008 is behind us and the economy is up and running at a fine clip.  But the reality is not so bright.  The recovery has been the worst from any recession in memory, unemployment is still unacceptably high, and inequality is only getting worse.  This grim picture was recently outlined by Berkeley economist Brad DeLong, who notes:

” US output is now seven years – 14% – below the level that was reasonably expected back in 2007. And there is nothing on the horizon that would return the US economy to – or even near – its growth paths before the 2008 financial crisis erupted….The US economy’s annual per capita underperformance in 2014 will thus amount to $9,000.  That means $9,000 per person in consumer durables not purchased, vacations not taken, investments not made, and so forth. By the end of 2014, the cumulative per capita waste from the crisis and its aftermath will total roughly $60,000.”

By contrast, the New Deal-led recovery from the depths of the Great Depression zipped upward at close to 10% per year except for the recession year of 1937 — after FDR mistakenly tried to re-balance the federal budget – and by 1940 returned to the size it would have been (the long-term growth path) without the Great Depression. The big difference today?  Austerity policies.  President Obama tried to stimulate the economy with the ARRA spending package of 2009-10, but it was far from enough.  Since then, the Republicans have insisted on curbing government expenditures, including the notorious Sequester.  This is exactly the wrong policy in a Great Recession!

The only consolation, as Prof. DeLong says, is that Europe’s recovery has been even worse — and that’s because the Germans have demanded austerity PLUS tight monetary policy, whereas the US Federal Reserve Bank has spent trillions pumping us the dollar supply.  Unfortunately, most of that has gone through the banks, not through the wallets of the people.

Why are we being told that everything is hunky-dory?  Because the stock market has had a banner year and the richest 10% of Americans are doing very well, thank you. There’s no crisis at the top, as DeLong points out.  Meanwhile, unemployment remains at recession levels (over 7% nationally and much worse in many parts of the country).  Moreover, if ‘discouraged’ workers are taken into account (those who are no longer seeking work because of the lousy labor market), unemployment is still in double-digit territory.  Tens of millions of Americans are hurting and the federal government is sicking on its hands.  Where’s a New New Deal when we need it?

Here is the full text of Prof. DeLong’s commentary from Nation of Change news feed.   DeLong-The Strange Case of US Inequality 2013