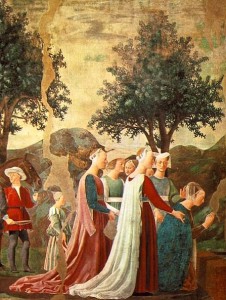 Piero della Francesca, The Queen of Sheba Adoring the Holy Wood, c. 1458, mural (part of the Cycle of the True Cross), Arezzo, Tuscany

The muralists of the New Deal are often perceived as being provincial and isolationist because their works celebrate “American values,” and depict a nation that is often rural, in a figurative style. Yet, many artists were internationally-minded and their realism was far from prosaic. They sought inspiration from various pictorial traditions: 19th century French art, the Mexican muralist movement, and, least well known, Renaissance frescoes.

In fact, New Deal artists were particularly interested in the Renaissance. This should not surprise us considering that the originator of the Public Works of Art Project (PWAP) and the Treasury Section of Fine Arts, and the programs’ leading administrators, were enthusiastic admirers of the Italian masters and strongly promoted them. George Biddle, who suggested the very idea of a government-sponsored mural program to President Roosevelt, had resided in Italy from the summer of 1931 until November 1932, during which period he acquainted himself with the fresco technique. The technical Director of the program, Forbes Watson (editor of The Arts magazine and an outspoken supporter of Modernism), celebrated the frescoes of Giotto, Masaccio and Piero della Francesca in the introduction to his volume Art in Federal Buildings (1936), which offered a survey of the murals that were being realized with the support of the Treasury Department. The Assistant Technical Director of the PWAP, Edward Rowan (a graduate student at Harvard’s School of Fine Arts) planned a trip to Tuscany in 1936 for the Section’s officials to see the frescoes and learn from them. The director of the arts programs, Edward Bruce, who had sojourned in Italy from 1922 to 1929, also urged artists to emulate Renaissance murals. 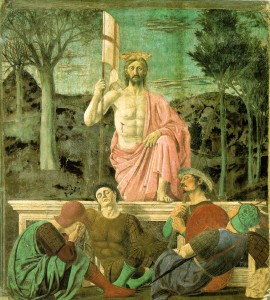 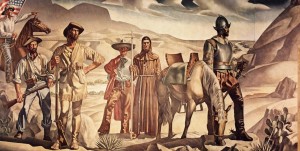 The administrators of the New Deal set the Italian muralists as examples to imitate because these older artists also painted for the community, rather than for private patrons, and extolled ethical and civic ideals. The frescoes of the early Renaissance were esteemed visually on account of their freshness and strong sense of composition, which helped make the stories immediately intelligible to the masses. Piero della Francesca was the most imitated of the Renaissance masters. He appealed to a number of New Deal artists, such as Grant Wood, Philip Guston, Ethel Magafan, and Tom Lea, for the serenity and the solemnity of his figures, and for his near-abstract style, namely his reduction of forms into simple geometric shapes—a feature that made him a cult figure among modernists. These questions are discussed in Luciano Cheles, “A Century-Old Passion: Piero della Francesca in America,” in idem ed., Milton Glaser nella città di Piero, Sansepolcro, 2007, pp. 5-21 [click here to read], and Luciano Cheles, “The Italian Renaissance in American Gothic: Grant Wood and Piero della Francesca,” American Art, vol. 30, 1, Spring 2016, pp. 106-124 [click here to read].

Luciano Cheles (Université de Grenoble- Alpes, France), previously taught at the universities of Lancaster (Great Britain), Lyon and Poitiers. His research has focused on Renaissance art, on the use of images for social and political ends in contemporary Italy and France, and on the impact of Piero della Francesca on European and North American visual cultures. His publications include The Studiolo of Urbino: An Iconographic Investigation (Penn State Press, 1986); Grafica Utile (Médiathèque Mitterrand, Poitiers, 2000); The Art of Persuasion, co-edited with L. Sponza (Manchester University Press, 2001); and L’Image recyclée, co-edited with G. Roque (PUPPA, 2013). The award of a Terra Foundation Senior Fellowship has enabled him to research on Piero della Francesca in America from the late 19th century to the present, at the Smithsonian Museum for American Art. He is preparing a monograph on the subject.