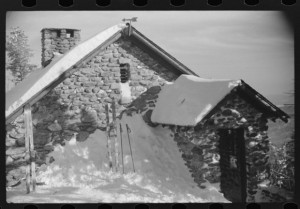 Forest ranger’s hut also used by skiers in the winter, near the top of Mount Mansfield, Smuggler’s Notch, Vermont, 1939. © Library of Congress

The work of the Civilian Conservation Corps (CCC) in Vermont had a lasting impact on the state and its recreational infrastructure. Under the guidance of State Forester Perry Merrill, more than 40,000 individuals worked in Vermont’s 30 CCC camps, building new state parks, planting forests and, most notably, developing downhill ski areas in Stowe. This small mountain town benefitted from numerous CCC projects, including the first downhill ski trails cut on Mount Mansfield, new base lodges, and related infrastructure such as access roads and parking areas. As a result, Stowe quickly became known as the “Ski Capital of the East” and remains a popular skiing destination today.

One of the most well-known and beloved CCC projects in Stowe is the Stone Hut, built on the top of Mount Mansfield during the winter of 1935-36. With its sturdy stone walls, large fireplace and wooden interior, the cozy Stone Hut quickly became a popular overnight camping destination for the public after the CCC work crews were done using it. It is so popular that the owner, the Vermont Department of Forests, Parks and Recreation, operates an annual lottery to award reservations for overnight stays. In recognition of its historic and architectural significance, the Stone Hut was listed in the State Register of Historic Places in 1989. 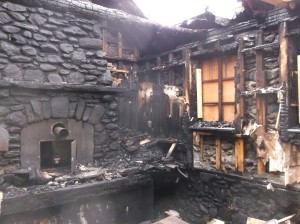 Disaster struck last year when, on Christmas Eve, the Stone Hut accidentally caught fire and all of the wood components, including the roof, interior, and floor system, were completely destroyed. The stone walls, although blackened with soot, remained structurally sound. There was an immediate outpouring of grief and offers of support as news of the fire spread amongst the skiing and camping communities. Thanks to a vigorous fundraising campaign and generous donations, enough money was raised to rebuild the Stone Hut based on the original 1935 CCC plans. The Vermont Department of Forests, Parks and Recreation; the Vermont Division for Historic Preservation; the Mount Mansfield Company; and the Vermont Parks Forever Foundation, were all instrumental in getting the Stone Hut rebuilt, and it will open to the public again on December 1, 2016, less than one year after the fire. Visit here for more information.

Devin Colman is the State Architectural Historian at the Vermont Division for Historic Preservation. His interests include New Deal arts and architecture.