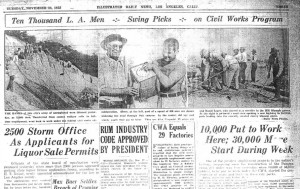 Do you live in Los Angeles, or are you planning to visit? If so, Andrew Laverdiere invites you to investigate the legacy of the most interesting period in modern history in the remains of stone walls, roads, golf courses, bridges, and other physical remains of the work programs that kept Americans alive during the terrible period of the 1930’s economic depression. In Griffith Park in Los Angeles, 4,300 acres of the largest urban park in the United States represents a showcase of president Franklin Roosevelt’s commitment to “put people to work!” It is pretty doubtful that the 3 million people that visit the park every year have an inkling about how the area was transformed from an a barren wilderness to the family mecca it is today.

In showcasing the New Deal, Andrew gives tours that comprise two different means, depending on the person’s ability and time available, areas that are accessible by car and areas that are only accessible by bike or by foot. The golf courses, the Greek Theater, Griffith Observatory, the CCC memorial statue, and the tennis courts are examples of Federal projects that are easily reached by car. Other aspects, such as numerous check dams, certain roads, hiking trails, and elaborate rubble wall water channels can only be reached by bike or by hiking on both graded trails and non-graded foot paths. In any case, come and let Andrew give you a glimpse historically into a section of the metropolis of LA and the example of what happens when proper leadership creates something beautiful and lasting. Contact him at [email protected]