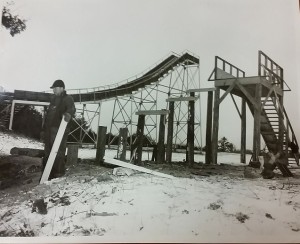 Sheila Collins, a New Deal scholar on our Research Advisory Board, has shared with us an article she recently published on Truthout, detailing the New Deal’s impressive imprint on just one town in central Wisconsin:

“Over the Thanksgiving holiday, my husband and I visited our daughter, who teaches at a branch of the University of Wisconsin in Stevens Point, and I decided to use the occasion to investigate the legacy of the New Deal in this small college city in central Wisconsin….

“What I found in Stevens Point, ranked seventh among the ‘best small cities’ in the United States, was astounding. In this one small city, whose population in 1934 was only 13,622 (currently 26,717), the federal government during the Great Depression had left a permanent legacy of public works that continue to contribute to the quality of life in Stevens Point. At the height of the Depression, when 10 percent of the town’s population was on relief, the Works Projects Administration (WPA) employed more than 400 Stevens Point residents in the building of dozens of amenities. P.J. Jacobs, the junior high school my granddaughter attends, was built between 1936-1938 with funds supplied partly by the Public Works Administration (PWA) and by workers employed bythe WPA, two of the several alphabet soup employment programs funded by the Roosevelt administration. It opened in 1938 as the town’s only high school until the 1970s when, by then, the population had grown too large. Workmanship in this school, as in all of the other WPA projects I observed, was of the highest quality. Reflecting the labor-intensive nature of New Deal employment programs, these were infrastructures that were not only meant to last, but to add beauty and elegance to their surroundings.” Read more.

Sheila D. Collins is professor emerita at William Paterson University and editor and author, with Gertrude Schaffner Goldberg, of When Government Helped: Learning from the Successes and Failures of the New Deal (Oxford University Press, 2013). She is the author of six books and numerous book chapters and articles on American politics and public policy. Her blogs have appeared in the Huffington Post, Truthout, Oxford University Press and New Politics.