Murals by Ben Shahn and Bernarda Bryson Shahn are at risk in the proposed sale of a New Deal Post Office in the Bronx. From the New York Times:

“…..  Described by the Landmarks Preservation Commission as the largest of 29 Depression-era post offices in New York City, the Bronx General Post Office occupies the entire block from East 149th to East 150th Street. Its most distinguishing feature is 13 lobby murals painted in the late ’30s by Mr. Shahn (1898-1969) and Bernarda Bryson (1903-2004), his companion and later wife.

Like much of the artwork of that era, the murals celebrate labor and its byproducts. There are colossal figures of farmers and mill workers, steel factories and hydroelectric dams — still powerful, though darkened, dulled, nicked and cracked. ‘My idea,’ Mr. Shahn once said, ‘was to show the people of the Bronx something about America outside New York.’ ” 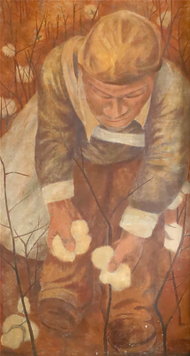 More from the Times: “There was no mention of the murals in the letter to the borough president, dated Dec. 31, 2012, from Joseph J. Mulvey, a real estate specialist for the Postal Service in Milford, Mass. Instead, he wrote, ‘In the face of unsustainable deficits, the Postal Service must seek ways to cut costs and reduce the size of its infrastructure.’…

… As is chiseled into an elegant commemorative plaque in the lobby, the General Post Office was built in 1935, “during the administration of Franklin D. Roosevelt.” It was part of a Treasury Department program to employ out-of-work architects, engineers, artisans and artists. Thomas Harlan Ellett was the architect. In the austere facade, tall arched windows penetrated a solid wall of gray brick that is otherwise unembellished except for two sculptures, by Charles Rudy and Henry Kreis.

Inside is a different story: an unfolding panorama of American labor and landscapes on all four walls.

No stranger to controversy, Mr. Shahn worked with Diego Rivera on murals that were removed at Rockefeller Center because they included a depiction of Lenin. He worked with Lou Block on a mural for the Rikers Island penitentiary that was rejected by the municipal Art Commission because its depiction of prison conditions was deemed unsuitable. …”

“The plaque, between two farming scenes, proclaims, ‘This building was erected during the administration of Franklin D. Roosevelt.’ “