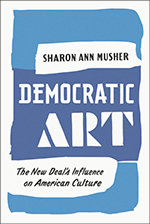 During the Great Depression, FDR’s administration allocated $27 million ($469 million in 2015 dollars) to art projects sponsored by the Works Progress Administration, putting some forty thousand unemployed artists of all stripes to work. Sharon Ann Musher’s Democratic Art: The New Deal’s Influence on American Culture is the first study to bring together the range of works fostered through government patronage (known collectively as Federal One), the relationship between artists and audiences, and the bitter opposition to the program from a welter of critics.

Many perspectives informed artistic production and its support during this era. Musher devotes chapters to four distinct, occasionally overlapping philosophies—art to “inspire,” “enrich,” “promote social and political ideas,” and “encourage healthy and productive activities.” Each examines the political and cultural legacies from which these ideals emerged and provides detailed case studies of how they were implemented and received.

Musher suggests the ways in which art responded to the Depression—how, for instance, the seemingly quaint murals associated with the era imagined a national legacy antithetical to self-interest and economic striving. Often, Federal One art told a story of perseverance as a national inheritance. But it could be more precisely topical, as artists incorporated contemporaneous labor struggles into their work.  And it worked both ways: Art also influenced grassroots politics. Advocates of housing reform, for instance, frequently cited the wildly popular play, One-Third of a Nation, detailing the travails of tenement living.

Musher’s use of oral histories and never-exhibited images reveal oft-ignored limitations of the New Deal’s civic spirit. The very forces that propelled organizers of Federal One projects—especially larger ones, like photography exhibits—also reined them in. In order to maintain funding or appeal to the broadest number of citizens, they often excised images or stories that challenged prevailing views of race and gender.

Often disparaged—whether by art critics who feared that public patronage created mediocrity or by Republicans who denounced the communitarian images in these works—Federal One collapsed by the late 1930s as resources were diverted to the  “Arsenal of Democracy” and Southern Democrats abandoned their party loyalty amid fears of liberal subversion. And yet, much of the art remains. Adorning our post offices, schools, and city halls, it constitutes memento mori of a unique political moment.