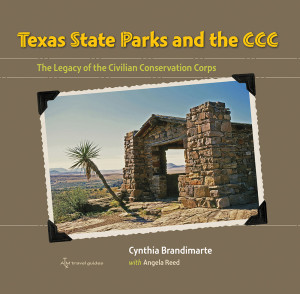 The 80th anniversary of the WPA has awakened interest, both academic and popular, in the New Deal’s legacy, including the development of some 800 state parks throughout the United States, courtesy of the Civilian Conservation Corps (CCC).

To honor and promote this legacy within the Lone Star State where the CCC constructed 29 state parks, the Texas Parks and Wildlife Department (TPWD) launched a website, “The Look of Nature: Designing Texas State Parks During the Great Depression” (www.texascccparks.org), and a companion book, Texas State Parks and the CCC: The Legacy of the Civilian Conservation Corps, which examines the initial development of the state park program; the rustic design and landscape considerations of park development, and the influence of the National Park Service during the New Deal decade.

Authors Brandimarte and Reed emphasize the importance of not just the stunning architectural and landscape features created by the CCC, but of the stories of the men who created them. Interviews with several CCC alumni, conducted by TWPD staff, are available on the website.

The greatest contribution of Texas State Parks is in the final chapter and the epilogue, highlighting the path-breaking work of TPWD in documenting, maintaining, and promoting the parks as architectural and historical legacies not just of Texas but of the nation.

With more than 200 photographs and 150 pages of text, Texas State Parks is a welcome addition to the literature on the CCC. Its rich images, informative sidebars, and park profiles will appeal to both academic and general readers. Its consideration of the CCC legacy for the twenty-first century make this book and website required reading for state parks employees and others responsible for the curation of important New Deal artifacts for future generations.

A version of Tara Mielnik’s review appeared in the Journal of Southern History, LXXX, No. 3 (August 2014), and is reprinted with permission.

Tara Mitchell Mielnik, the federal programs coordinator for the Metropolitan Nashville Historical Commission, is Research Associate for Tennessee for the Living New Deal. She is the author of New Deal, New Landscape: The Civilian Conservation Corps and South Carolina’s State Parks.