The University of California has sold off a redwood carving by renowned Berkeley African American artist Sargent Johnson.  The sculpture, completed in 1937, hung in the School for Deaf and Blind, now the Clark Kerr Campus, of UC Berkeley.  Johnson worked for the Federal Art Project of the Works Progress Administration, a publically funded program of the New Deal.

The carving (nearly 9 feet x 22 feet), created as a pipe organ screen, was one of two by Johnson. Both were installed in a building that was renovated by the university as student dormitories and meeting rooms. During renovation the artwork was stored at the UC warehouse. 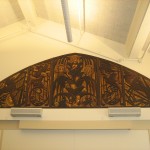 In 2009 Living New Deal advisor Harvey Smith, president of the National New Deal Preservation Association, learned that the Johnson carving had been misplaced and then sold as “surplus” in 2009 to a private art dealer. Johnson was a longtime resident of the city of Berkeley, and his work was paid for with federal tax dollars–meaning it was public property.

Smith contacted the General Services Administration (GSA) in Washington , D.C., the agency responsible for protecting federal artwork.   He was told that the GSA had made an exception when it allowed the university to sell the Sargent Johnson work. claiming it allowed the sale in “this one specific instance.”  He felt this determination was suspect and disregarded the GSA’s role in protecting the New Deal artistic legacy.

Subsequent inquiries by Smith led to a written statement by the GSA in January 2012 stating the agency’s “preference” that the artwork be “reacquired and reinstalled” by the university.

“The GSA and the university have shown total disregard for our country’s artistic legacy when they allowed the work of an important African American artist to be sold as surplus.  As a world-class university with a major art museum, its incompetence is astounding.  Where are the checks and balances?”  Smith said. “It’s a betrayal of the public trust. Once the broader community learns about this ill-conceived sale there will be some who will certainly ask the question ‘Would the work of a European-American artist have been disposed of in this way?’” Smith said.

The Johnson screen was disposed of by UC Berkeley for $150.  In May 2011 the Johnson piece was sold to the Huntington museum in San Marino, California, probably for six figures.  Truly astounding short-sightedness by the university.

The Living New Deal Project, the National New Deal Preservation Association, Berkeley historians, New Deal scholars, and members of the local African American community intend to demand that the University of California reacquire the Johnson work; prevent sale of the companion piece; and inventory and protect of all federally funded artwork housed at UC.

Berkeley’s City Council has admonished UC for its blunder. Click here for the story.