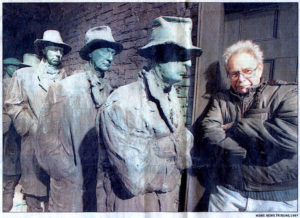 The first of the five bronze figures in George Segal’s “Depression Breadline” sculpture at the Franklin Delano Roosevelt Memorial depicts Works Progress Administration (WPA) artist Leon Bibel—a lifelong friend of Segal’s. Many notable American artists relied on New Deal employment during the Great Depression. Leon Bibel was one of them. Segal’s depiction of Bibel is a testament to a friendship between artists as much as an homage to the artists of the Great Depression.

The artists George Segal and Leon Bibel shared a similar background. They had lived on the same rural New Jersey road since the early 1940s, and were both, for a time, chicken and egg farmers. They were also trained artists who shared ideas, materials, and political views.

George considered Leon a mentor. George’s senior by a few years, Leon had participated in the Civilian Conservation Corps (CCC) and the New York City Federal Art Project of the WPA.

As a teenager, George recalled his father listening in rapt attention to newly elected Franklin Delano Roosevelt give his “fireside chats.” The President, with compassion and action, reassured those who had endured staggering economic hardships that help was on the way.

For Leon, that help materialized during a pivotal moment. He was fresh out of art school, desperate for any work, when he learned of a project that paid artists to be artists, more than he could ever have hoped for.

Several decades later, a project was underway for a memorial in Washington, DC to honor President Franklin Delano Roosevelt. The plans had begun in 1946, but it wasn’t until the 1970s that the project began taking shape. Several American sculptors were commissioned to participate, among them, George Segal.

Segal was a fitting choice to work on the National Mall memorial. His family’s group of friends, all immigrants, and all, as he described, “flat broke,” had respect and admiration for the President who championed the cause of the working people. This family history brought Segal’s connection to the president full circle.

The memorial is divided in four sections, paralleling FDR’s four terms in office. Segal’s space has three elements relating to the despair of the Depression, as well as the hope that FDR’s leadership brought to the country. There is an Appalachian Farm Couple, The Fireside Chat, and The Depression Breadline.

Since Leon had been the only person George knew who had ever stood in a breadline, it was natural that they collaborate once again for this project. At the time when he became George’s subject one last time, depicted as the first figure in The Depression Breadline, Leon Bibel was 80. Sadly, Leon didn’t live to see the final installation of the sculptural program.

George Segal was chosen to memorialize the President, and his family history of reverence for FDR made that especially meaningful for him. Participating in CCC and WPA projects saved Leon Bibel when the Depression had a stranglehold on so many in this country. This final collaboration between artists on a project that touched each of them so personally was a fitting coda to a remarkable friendship.