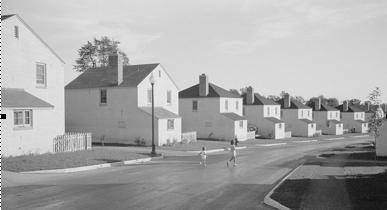 From Living New Deal intern Erin TerBeek comes this nice piece on Greendale, one of the New Deal resettlement towns. Erin wrote the article for the Express Milwaukee where she writes regularly:

“Combining city and nature—affordable homes, ample parks and gardens, schools and commercial centers within walking distance—was the idea for Greendale, Wis. A community planned by the government during the Great Depression of the 1930s, Greendale was one of three ‘Garden Cities.’

During President Franklin D. Roosevelt’s presidency, the federal government allocated billions of dollars to government agencies through a program called the New Deal. With the idea of pushing America out of what was a crippling economic depression, The New Deal created projects to put Americans back to work while improving infrastructure.

In 1936, the U.S. Department of Agriculture created the ‘Greenbelt Towns’ project with New Deal funds. Three towns were chosen to create communities with affordable housing near schools and areas of commerce, yet also filled with the beauty of nature through numerous parks and gardens. Located outside of large cities, these towns were intended to combine the best parts of living in a city and living in the country. Greendale, Wis., Greenhills, Ohio, and Greenbelt, Md., became the three chosen communities.

Built on approximately 3,400 acres of old farmland, the planned community of Greendale saw its first tenants on April 30, 1938. The town consisted of 366 homes—with large tracts of green space and in a variety of forms: single family, multi-family and row houses—creating 572 living spaces. Greendale also included a village hall, businesses, a theater, a tavern, a volunteer fire station, schools, a newspaper and a community market.

In 1949, the Public Housing Administration gave residents the chance to purchase the homes.  Many in the community did buy their homes, and in 1952, almost all transfer of ownership to the community was complete.

Greendale, Wis., is now on the state and federal register of historic places, since many of the original homes still exist. Michelle Obama recently marked Greendale as a ‘Preserve America Community,’ part of a federal program that encourages and supports efforts to preserve our cultural and historical heritage, which should keep Greendale on the map for many years to come. ”  [From the Express]