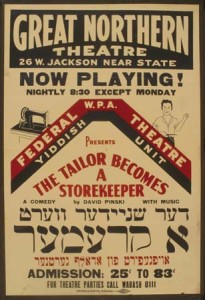 Theatre units in cities throughout the country staged classics—Shakespeare and the Greeks— as well as plays by new writers like Eugene O’Neill and George Bernard Shaw. But the Federal Theatre Project also endeavored to serve diverse cultures, enabling immigrant actors to perform for audiences that understood them. Its repertoire included performances in French, German, Spanish, and Yiddish—the language Eastern European Jews had brought with them to America and continued to speak in the 1930s.

The Yiddish Unit of the Federal Theatre created some new and adventurous stage productions that remain largely unknown to theatre historians because the plays were neither translated nor published.

David Pinski’s 1937 satire, The Tailor Becomes a Storekeeper, for example, is the story of a sweatshop tailor who dreamed of owning a restaurant and grocery. Pinski’s Yiddish farce showed Sam, the tailor, struggling to keep his new premises open. Eventually, in a happy ending, Sam returns to his tailor shop and joins a union of tailors that gives him job security in a time of economic hardship.  New York Times critic William Schack found Pinski’s “genial parable” to be “playfully written and performed as an expressionist romp.”

While Pinski is regarded as one of Yiddish theatre’s most important playwrights, this work, which premiered under FTP auspices in Chicago on February 25, 1938, is rarely discussed in print or performed. In 2016, with union membership in decline, it might be worth reviving Pinski’s script for new audiences. 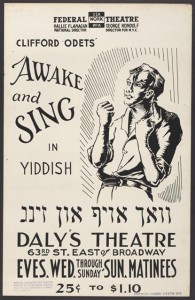 Other Federal Theatre plays performed in Yiddish included a stage version of Sinclair Lewis’s novel, It Can’t Happen Here, and Clifford Odets’s Awake and Sing—both of which were also widely seen by English-language audiences. The plays had special appeal to Yiddish-speaking immigrants because they dealt with poverty and political repression as Jews had suffered in Eastern Europe before they moved to America.  Another of the Yiddish Unit’s innovative productions was a vaudeville revue titled We Live and Laugh, featuring a cast of one hundred Yiddish actors. Like Pinski’s, the work was never published, though it can be found in the National Archives.

The democratic and inclusive nature of the Federal Theater Project welcomed Americans to theater—many for the first time. There were children’s plays, puppet shows, and a touring circus. A Negro Unit served African–American actors and audiences at a time when it was particularly difficult for Black artists to find stage work.

Admission prices were kept low – or not charged – because the government had placed the actors and artists on its payroll.

Congress had reservations about the content of a few of the works, which were condemned at hearings in Washington. The Federal Theater Project ultimately was defunded. But the plays it produced were gratefully attended by millions of people across the country.

Joel Schechter teaches theatre history at San Francisco State University.  More details on the plays discussed here and other Yiddish drama can be found in his book Messiahs of 1933.  (Temple University Press, 2008). Email