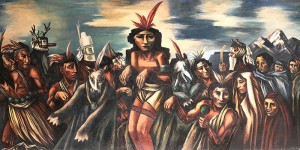 As communities around the nation protest the dismantling of the U.S. Postal Service and the sell off of historic post offices—some containing New Deal art works—the Smithsonian’s Museum of the American Indian and National Post Office Museum have jointly debuted an online exhibition of post office art depicting Native Americans: Indians at the Post Office: “Native Themes in New Deal-Era Murals.”

A research team pouring over photos of the roughly 1,600 post office murals that were sponsored by the Treasury Section of Fine Arts in the 1930s found that about a quarter of them depicted Indians. From these, the team selected two-dozen murals that it organized into categories including Treaties, Encounter, Conflict, Evangelization, Indian Lifeways, and The Myth of Extinction. 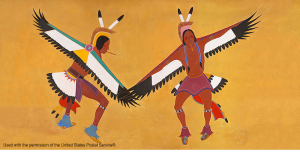 An essay accompanies each mural detailing its locale, the circumstance of its creation, subject matter, tribal details, artist biography, and more. Largely thanks to papers collected and oral histories conducted by the Archives of American Art, the sometimes subversive intentions of the artists, not obvious to the casual viewer, can now be explained.

Like the lands over which Native Americans and immigrants fought, the team has staked out contested terrain: many New Deal painters hired to adorn the post offices visually reiterated mythologies congenial to those who had won and occupied the land.  But, as a Forward to the exhibition correctly states, the muralists often encountered political minefields, “Artists were constantly reminded by Treasury officials that the communities were their patrons, and they must go to great lengths to satisfy the desires of everyone involved in the project in order to save their commission. Needless to say, “everyone” did not include the Indians they so often depicted. With the exception of a few Native artists and others sympathetic to their forcible displacement, history was portrayed by the victors to legitimate their conquest. 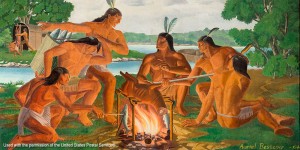 ‘Indians at the Post Office” suggests other themes yet to be tackled in the continent-spanning gallery of public art created during the Great Depression by the Treasury Section. These could include themes such as local labor and economy, nature, technology, African-Americans, and above all, postal work and service. Since art encompasses fine architecture, such an exhibition should be staged at the National Building Museum only a few blocks from the National Postal Museum. It would provide Americans an opportunity to see what we paid for, and what we are now so rapidly losing.