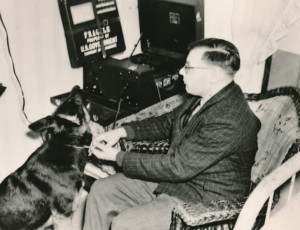 The description for this 1938 photograph reads, “The blind man is listening to one of the “talking book” records in his home, selected and mailed by a WPA library project worker. A talking book “not only talks and reads, but can present complete dramas with full Broadway casts, chirrup bird songs and calls of wildlife, and in other ways take full advantage of the fact that it is written in sound.” Courtesy, NARA.

Over fifty years before the Americans with Disabilities Act, the New Deal undertook the first major federal effort to aid citizens with physical and mental challenges. Between 1933 and 1943, mainly through the Works Progress Administration (WPA), thousands of New Deal works projects were directed at expanding, improving and staffing disabled services around the country. Facilities for the disabled were among the most elegant public works built in that era.

The New Deal was an especially transformative period for blind Americans. On June 20, 1936, President Franklin Roosevelt signed the Randolph-Sheppard Act, providing economic opportunities and services for the visually impaired. The legislation gave those qualified priority over other vendors to operate concessions, so-called “vending facilities,” on federal properties, including on military bases. 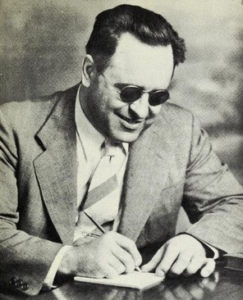 Joseph Clunk, the first blind civil servant in the federal government, was appointed in 1937 to administer the Randolph-Sheppard Act and serve as a “special agent for the blind.” Courtesy American Printing House for the Blind, sites.aph.org.

The passage of the Randolph-Sheppard Act also motivated legislatures in nearly every state to craft similar laws, referred to as ‘mini-Randolph-Sheppard Acts.” These federal and state initiatives today provide economic opportunities to more than 2,500 individuals.

The first blind civil servant, Joseph Clunk, (1895-1975), was hired a year later. Working in the federal Office of Education, Clunk’s main duty was to administer the new law. It seems he held this role until at least 1949, when he became Managing Director of the Philadelphia Association for the Blind. 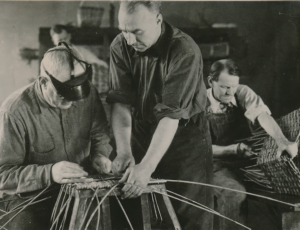 The WPA provided employment and training of blind workers in Atlanta, Georgia, in the production of goods like brooms, baskets and rugs, some of which were distributed to low-income Americans. Courtesy, NARA.

Many blind Americans found employment in the WPA, where they received instruction in various occupations. The WPA photograph collection at the National Archives reveals many such projects implemented to help the blind become more self-supporting. For example, WPA workers transcribed books into Braille using Braille writers, a machine similar to a typewriter, and recorded “talking books,” precursors to today’s audio books. WPA workers installed labels in Braille at the garden at the Indiana State School for the Blind in Indianapolis. The Public Works Administration (PWA) also provided funding for special education facilities, such as the elementary school on the campus of the Romney School for the Deaf and Blind in Romney, Virginia, one of several such facilities still in use today. 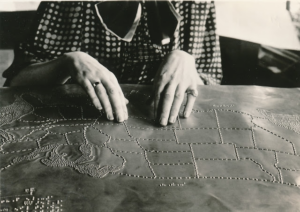 A WPA Braille Map at the Perkins Institute for the Blind, Watertown, Massachusetts, 1936. Courtesy, NARA.

President Roosevelt was not a dispassionate observer of these efforts. In a 1935 telephone call he congratulated the American Foundation for the Blind on the dedication of its new Administration Building in New York, saying he was proud of his association with Helen Keller, whom he would later make chairman of a federal committee to promote goods made by the blind. Keller, blind and deaf since childhood, worked for the foundation for more than forty years. 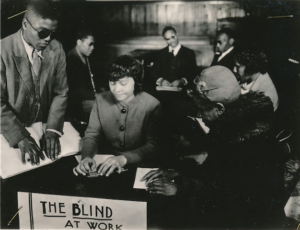 FDR also said he considered it “a privilege to have a part in aiding the betterment of conditions for those who have been handicapped by lack of vision and, when I say lack of vision, I mean it in the purely physical sense, because people who are blind certainly have a splendid vision in every other way.” 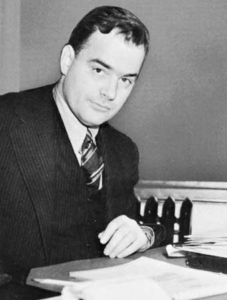 Highlighting the nation’s problems during the Great Depression—and the federal government’s responses to those problems—was the job of the United States Film Service, established in 1938 as part of the New Deal’s Resettlement Administration, later renamed the Farm Security Administration (FSA). The Service’s inspiration was Pare Lorentz, a pioneer in the production of documentary films. Lorentz, a native of West Virginia, directed the U.S. Film Service from 1938 until 1940.

Lorentz’s first film, The Plow That Broke the Plains, about the Dust Bowl, was completed for the federal government in 1936. Hired to head the Film Service, Lorentz soon added The River, to his film credits. Completed in 1938 under the FSA, The River dealt with the disastrous floods along the Mississippi River and construction of Norris and Wheeler Dams. 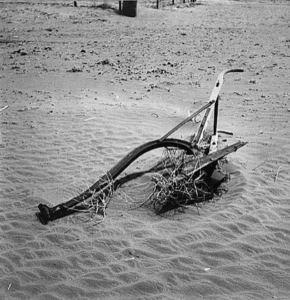 The Plow That Broke the Plains
This classic film about the Dust Bowl has been one of the most widely studied documentaries. It was the first film to be placed in Congressional archives. Photo by Arthur Rothstein. Credit: Library of Congress.

Both films employed forceful narration and a dramatic soundtrack to expose how over-farming and soil erosion contributed to natural disasters and the New Deal’s response in the form of the Tennessee Valley Authority, Soil Conservation Service, Civilian Conservation Corps and other conservation initiatives. Lorentz used this tried-and-true style to direct or supervise three more documentary films for the Film Service.

The Fight for Life (1940), about a community health program to reduce maternal mortality, utilized professional actors. (Will Geer would later portray “Grandpa” in The Walton’s). It concludes with a tense scene in which a new mother pleads, “You won’t let me die, will you doctor?” (No spoilers here!) 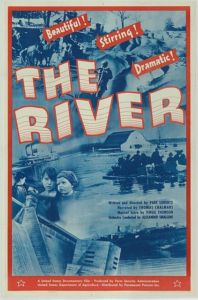 Film Poster for "The River," directed by Lorentz and produced by the FSA.
The companion book to The River was nominated for a Pulitzer Prize for poetry. Credit, NARA.

The excellent, tightly focused Power and the Land (1940) follows a farming family as they go about their daily chores, pre- and post the Rural Electrification Administration that transformed remote areas of the country—no more oil lamps, just a flip of the switch!

The Land (1949) explores farming problems of the 1930s. It features a segment on Latino migrant workers and music by the National Youth Administration, but the narration is dull and the film falls flat.

The U.S. Film Service ended in the same way many other New Deal programs ended—it was defunded by national defense distractions and an increasingly hostile Congress.

After the New Deal, Lorentz created training films during World War II, worked as a film consultant and produced two notable documentaries: Nuremberg: Its Lesson for Today (1946) and Rural Co-op (1947), but struggled to raise money for other film projects. He died in 1992 at age 86.

His legacy lives on, aided by the Pare Lorentz Center at the FDR Presidential Library & Museum and the IDA Pare Lorentz Documentary Fund, which supports independent films about society’s most pressing problems. 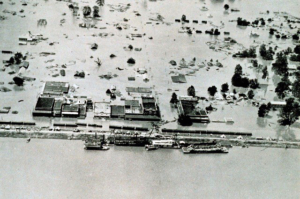 Were Lorentz alive today—and running a U.S. Film Service—one could expect to see documentaries about such problems as global warming, ocean pollution, wildfires and America’s growing economic inequality playing at local movie theaters. Lorentz believed in the power of film to enlighten the electorate and inspire social change. (He also felt that Hollywood was spending too much time on the frivolous).