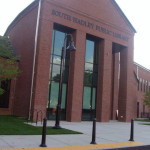 Since the earliest years of the American Republic, but especially since the mid-nineteenth century, there has been a divide between rural and urban communities. This conflict persists today in several forms, one being the disparity of available knowledge between these spaces. Different states have their own unique divides, and for various reasons—and the Commonwealth of Massachusetts is no exception to this rule. Eastern Massachusetts, built around Boston, is more densely populated and more developed as compared to the western half. In fact, even though Western Massachusetts is home to one-third of the state’s total area, its population amounts to only one-ninth of the state total. Consequently, Western Massachusetts has had to be a constant advocate, pressing for access to knowledge in the forms of various institutions. In the 1930s, an innovative program spawned out of the New Deal worked to address this deficit of available knowledge in rural America.

Recently, I became involved with a project exploring the history of the Massachusetts Library System (MLS). This organization operates as a collaborative. Its goal is to ensure that all public libraries within the state of Massachusetts can work together and freely share their resources. The MLS also decides how state funds are allocated to each library, depending on the wants and needs of each institution. For a state that is over 200 years old and known for the value it places upon education, it is surprising that the MLS did not expand to all libraries within Massachusetts until 2010. Until the MLS brought all of these libraries into their organization, many isolated regional library systems existed within the state. The last holdout to this consolidation of regional libraries was the Western Massachusetts Regional Library System (WMRLS). This organization was created in 1940 through New Deal funding via the Works Progress Administration (WPA). It was seen as a way to share resources and materials across various institutions within the four most western counties of the state. This group-sharing system worked quite well for the libraries and academic institutions that participated. These other academic institutions could include any organization that owned a library, archive, or records and wished to join into this group sharing network. During the first two years of WPA funding, this library collaborative effort grew to 92 member institutions, including local universities, community colleges, public libraries, schools, hospitals, and even courts. Over the years, this regional entity would grow to total 312 members before ultimately being absorbed into the MLS in 2010.

While the WMRLS no longer exists, its mission lives on through a sister organization called the Western Massachusetts Library Advocates (WMLA), founded in 1898. This organization overtook the role the WMRLS played in advocating for rural libraries following their consolidation into the MLS. Many members of the former WMRLS have become members and even officers with the WMLA organization. They continue to advocate for rural libraries and work to improve access to knowledge in a variety of ways. Many rural communities in the United States suffer from this lack of attention by the more urban and populous sectors of society. This may start with access to educational options, but in time leads to limited access to higher paying jobs, less market activity, and ultimately spirals back to the area’s social services including local libraries, which are forced to pool their resources and band together in order to take care of their sparsely populated regions. What solutions are available to address these problems? Do the answers already exist in lessons from our past? Many rural libraries and library systems, including the WMRLS, were created through New Deal funding under the Roosevelt administration. Would it be possible to emulate these programs such as the WPA, which have proved successful in the past? During its time, programs such as the WPA and Civilian Conservation Corps (CCC) reinvested billions of dollars into local municipalities in order to both alleviate unemployment and provide an updated infrastructure for community services. Examples of this new infrastructure included libraries, museums, post offices, bridges, and many more. These institutions and structures are still a part of the fabric of the many towns and cities they were created in. Could pumping either state or federal funds into rural communities reverse this intellectual schism that still persists today? While I cannot say for certain this is the answer, there is enough historical precedent to at least give it a try.

Gregg Mitchell is a graduate student at UMass Amherst in the Public History program, pursuing an MA in History along with a Certificate in Public History. He has held positions at several different historic organizations in Western Massachusetts, including working as an archival assistant at Wistariahurst Museum, and developing a local history room for the South Hadley Public Library, among others. Gregg holds a BSE from Westfield State University and a BA in History from UMass Amherst. Gregg is also a licensed teacher in Massachusetts.
Email | View all posts by Gregg Mitchell →

One comment on “Regional Libraries and the Rural/Urban Knowledge Schism”