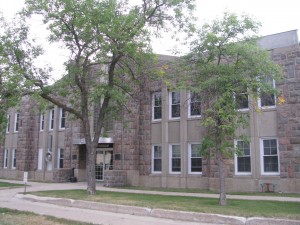 “The ‘New Deal’ legislation passed under President Franklin Roosevelt’s administration set the stage for the construction of the Wishek Civic Center.  The Wishek Civic Center was built under the auspices of a federal worker relief program known as the Works Projects Administration (WPA).  The WPA put unemployed laborers to work on public projects of all types in a successful effort to generate income for themselves and get things done in communities across the nation.

The City of Wishek benefited from several of these projects.  The city park, community swimming pool, Wishek Civic Center and many of the sidewalks in town were all built by WPA workers.

The civic center’s uniqueness lies in the material from which it is constructed.  Project planners wanted to construct the building out of material that would last.  Since the most readily available material was native rock and stone, they gathered prairie boulders from the outlying area to be used as the primary construction material for the massive building.

The architect who designed the building, Gilbert Horton, used the rock in a creative way.  The boulders were hand-chiseled, placed in layers and held in place with concrete.  The rock was sorted by color and size, and crews were assigned to prepare it for placement.”   (http://www.wishek-nd.com)

Project originally submitted by Brent McKee - wpatoday.org on May 23, 2013.