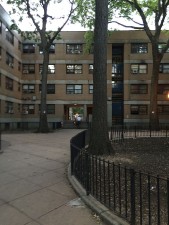 The Williamsburg Houses were opened in 1937, one of three huge public housing projects in New York City funded by the Public Works Administration (PWA), along with First Houses and Harlem River Houses in Manhattan.  New York City was the unchallenged leader in the creation of public housing in the United States, beginning in the 1920s, and the New Deal allowed the city to continue to built high-quality public housing that has stood the test of time.

The official PWA history, published in 1939, described the project in detail:

“Williamsburg Houses, the ‘city-within-a-city’ slum-clearance project, erected in the heart of the historic Williamsburg section of the borough of Brooklyn, city of New York, is one of the largest low-rent housing projects undertaken in the United States. It provides homes for 1,622 families in the low-wage brackets. This project occupies 20.2 acres and supplants twelve of the most blighted and congested slum blocks in Greater New York City.

The 5,719 rooms which make up the Williamsburg project are located in 20 fireproof, 4-story walk-up apartment buildings. These structures, covering about 32 percent of the 20.2 acre site, are set at a slight angle from true north and south giving each building a maximum of recreation space, ventilation, sunlights, and the benefit of prevailing summer breezes.

Each building has a full basement providing space for individual laundries and drying rooms, nurseries, social units, and craft rooms. There are, in all, seven craft rooms. There are, in all, seven social units. seven craft rooms, and a nursery school occupying 5,700 square feet. Approximately 3 percent of the 1,622 apartment units are 2-room, 47 percent 3-room, 46 percent 4-room, and 4 percent 5-room units. All rooms open on landscaped courts and park areas. Within the project 49 stores and shops have been leased on private individuals.

Together with a landscaped park and numerous playgrounds, the project covers twenty five gross acres, formerly twelve slum blocks. The buildings, occupying only about 30 per cent of the gross area, are grouped into four super-blocks, formed by closing two through streets to traffic. Three blocks have six apartment houses each, the other has two houses the new William J. Gaynor Junior High School, a park, and a playground. Unfortunately, the school is in a rather dull neoclassic style which adds little to the architectural interest of the group.

The houses are placed at a fifteen-degree angle to the streets to orient the buildings toward the sun. The buildings, individually pleasing in design, are of fireproof construction with reinforced concrete floors. Color provides much of their charm–yellow ochre brick, gray cement, blue-gray terra cotta between windows, bright blue doors, and dark blue store front parapets. The floor lines are marked by horizontal bands of concrete, which create an unusual striped effect. Most of the details–entrances, store fronts, etc.–are imaginative and highly successful. The entire group was planned by a committee of architects selected by the New York City Housing Authority, with R. H. Shreve as chairman.

All apartments–two to five rooms–are equipped with electric stoves, refrigerators, and modern plumbing, and supplied with steam heat, hot and cold water. The living room of a typical apartment has a floor area of 150 square feet; the kitchen, 75; and the bedroom, 120.

Williamsburg Houses are under the management of the New York City Housing Authority. Tenants are selected on the basis of income and the need for better housing. No family is eligible whose total income is more than five times the amount of rent plus the cost of utility service. Preference was given to families that had lived on the site of the development, provided they were otherwise eligible as required by law. The first tenants, chosen from a list of more than nineteen thousand applicants, moved into the project in September, 1937, and since then only a few have moved.

Rents, paid weekly in advance, range from $4.45 a week for a two-room apartment to $7.20 for five rooms; electricity for an apartment costs 90 cents to $1.20 a week. Three hundred and ninety-eight residents are employed as clerical workers, 49 as professionals, managers, and officials, 353 as skilled workers, 468 as semiskilled, and 283 as unskilled.

The cultural activities are held in the social and craft rooms of the project and the community center of the high school. The Authority provides space for classes for mothers in child care and psychology, men’s and women’s clubs, a glee club, a tenants’ council, and youth groups, but these activities are initiated and conducted by the tenants themselves. The tenants also publish a semimonthly paper, the Projector.

T. F. Hamlin, in an article in Pencil Points, declared that the Williamsburg development offers more of the amenities of good housing than many expensive Park Avenue apartment houses. “In every really important general matter of land usage–in air, in light, in a sense of green and growing things as a concomitant of living; in the creation of an atmosphere of humanity and decency, a place where children would be glad to grow up; in the development of a community that brings with it a new vision of democracy and of progress,” he said, “[this development has] qualities that no money can buy.”

As for the architecture, it was bold Modernism in its time, designed by some of the city’s finest architects.  Professor Andrew Dolkart of Columbia University School of Architecture, Planning and Preservation points out that the Williamsburg Houses project “…is an early example of European modernist planning and design.”

“The best public housing project ever built in New York but also the first and most expensive (in adjusted dollars). Its 4-story buildings embrace semiprivate spaces for both passive and active recreation. Reinforced concrete and brick infill is punctuated by pedestrian ways that connect sequential courtyards through stepped and columned portals. The apartments themselves are reached without benefit of corridors by an entry system that opens directly off the stair landings (as in Princeton Collegiate Gothic, here in serene modern dress). The new aluminum doublehung windows are a clunky alteration, replacing elegant slender-mullioned, but unhappily deteriorated, steel casements.  Stripped of its original brick, and articulated with blue tiles, the revivified Williamsburg Housing seems a fresh breath of architecture once again.”
(https://nyc-architecture.com)

(It seems, however, that First Houses in Manhattan were built ahead of Williamsburg Houses.)

The Brooklyn-based  “Brownstoner” website  identifies the architects of the project:

“Working for the New York City Housing Authority (NYCHA), founded in 1934, a team of ten architects, led by Richmond H. Shreve and his head designer, William Lescaze led the project. Shreve was a partner in Shreve, Lamb & Harmon, forever known for their design of the Empire State Building. William Lescaze was a pioneer of the new International Style, a clean, minimalist style of architecture…”

Chief designer William Lescaze wanted to design something different. One of the ideals left over from the City Beautiful Movement, as well as European models of apartment design, was the concept of open spaces and parkland. People need open space to escape from crowded tenements and people living on top of each other. Reformers in the late 19th and early 20th century had pushed for small and large parks in the city for this reason. This part of Williamsburg had no parks, another reason for the choice of this location.”
https://www.brownstoner.com/history/walkabout-the-williamsburg-houses-part-2/

(Unfortunately, the Brownstoner makes the common mistake of confounding the PWA and WPA, wrongly attributing the Williamsburg Houses to the latter).

“Williamsburg Houses – S. View Bushwick Ave. & Maujer Street, N.Y. In the Williamsburg Section of Brooklyn, known as Ten Eyck Houses. All of the demolition work was done by the WPA but the building of the new structure was entirely a PWA project.”

"Williamsburg Houses - S. View Bushwick Ave. & Maujer Street, N.Y. In the Williamsburg Section of Brooklyn, known as Ten Eyck Houses. All of the demolition work was done by the WPA but the building of the new structure was entirely a PWA project."

"Williamsburg Houses - S. View Bushwick Ave. & Maujer Street, N.Y. In the Williamsburg Section of Brooklyn, known as Ten Eyck Houses. All of the demolition work was done by the WPA but the building of the new structure was entirely a PWA project." 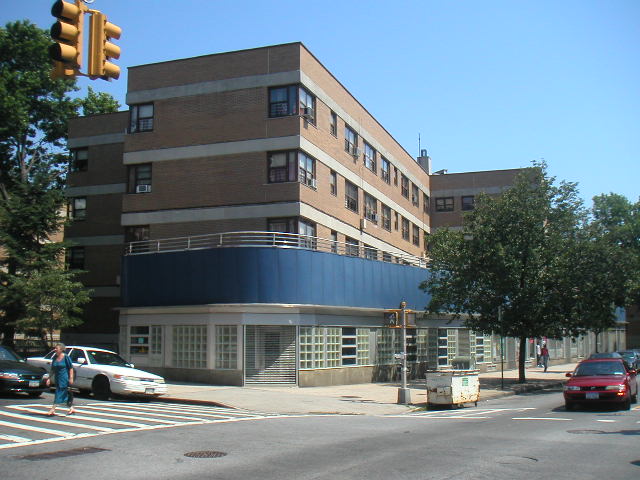 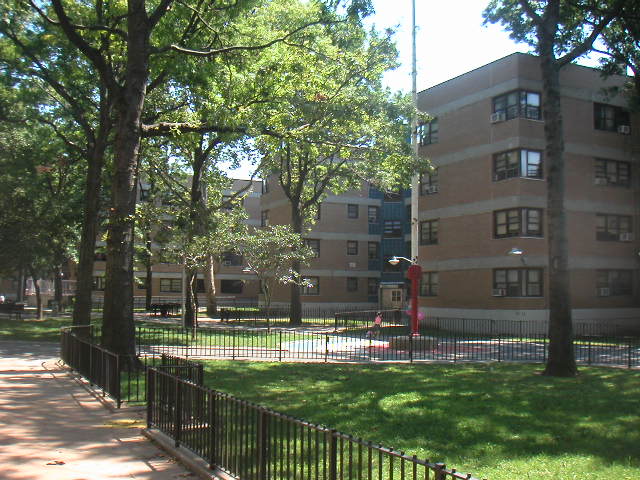 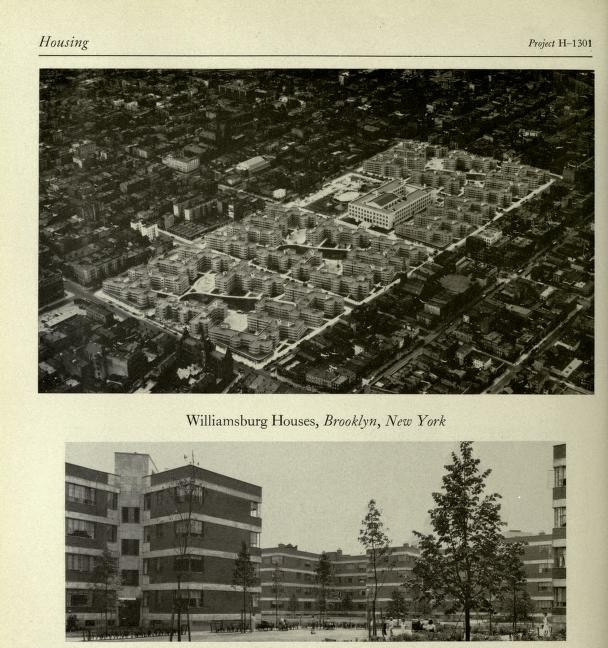 C.W. Short and R. Stanley-Brown. "Public Buildings: A Survey of Architecture Projects Constructed by Federal and Other Governmental Bodies Between the Years 1933 and 1939 with the Assistance of the Public Works Administration." (1939). 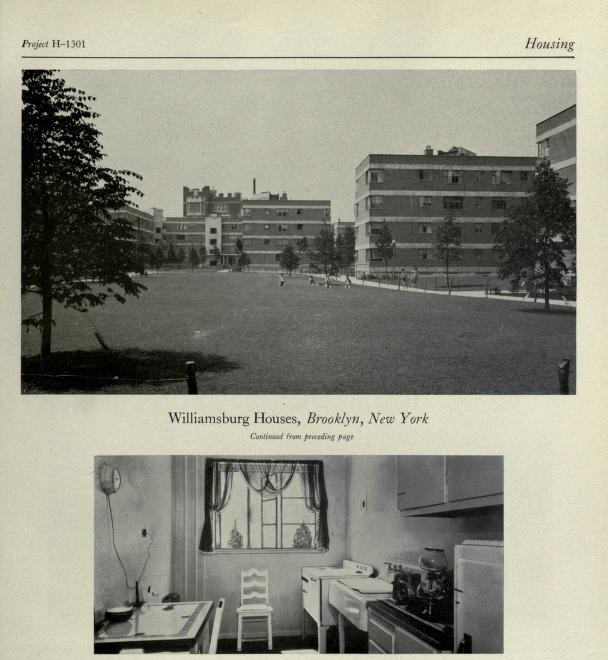