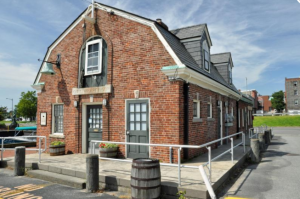 Between World War I and World War II, the economy of New Bedford changed dramatically. The city’s whaling industry disappeared and textile manufacturing plummeted. In 1937, the city’s unemployment rate was a staggering 32.5 percent. New Bedford was down and out, with many families struggling to survive. The WPA’s intervention in New Bedford was intended to boost the city’s fishing industry. In 1925, New Bedford fishermen still had to sell their catches at Fulton Fish Market in New York because New Bedford did not have its own fish auction house. Eventually buyers began to come to New Bedford to buy fish directly from the fleet and use trucks to transport the fish to other markets. This also drove the creation of a number of fishing-related jobs in New Bedford such as filleting, freezing, ice making, outfitting, packaging, and transport.

Between 1934 and 1935 the New Bedford economy was at an all time low, but the city’s fishing industry began to grow. Mayor Charles S. Ashley used WPA funds to demolish the Bristol, Acushnet, and Potomska textile mills and use the recycled bricks to construct a number of public buildings in the city. The recycled bricks from the Bristol Mill were used to build the Wharfinger Building on Pier 3. The building’s design, drawings, and cost estimates were completed by Everett T. Blossom, whose work was supervised by George O. Gardener, Superintendent of Buildings for the City of New Bedford. The Wharfinger Building was originally constructed to serve as the office for the city’s “wharfinger,” the individual who collected wharfage fees and oversaw other shipping activities of the port. During the winter months, the building was also used to provide shelter and warmth for women and children waiting to board steamships at the docks.

In 1941, the city opened the Wharfinger Building as the city’s first official fish auction house. At the auctions, which began each day at 8:00 a.m., the entire catch of all participating fishing vessels was sold to the highest bidders in a matter of 15-20 minutes. In 1942, a one-story addition known as the “west wing” expanded the size of the building. As the city’s fishing fleet landed more and more fish, this space was used to accommodate up to three auctioneers. In 1985, a bitter strike between fishermen and boat owners eventually caused the end of the daily auction and instead the private sales of fish became the norm. In 1994, the Whaling City Seafood Display Auction (now called BASE or Buyers and Sellers Exchange) was established. In 1997, this auction went electronic and today it is the largest east coast seafood auction.

When the seafood auction ended, the City of New Bedford first used the Wharfinger Building to house offices for the city’s tourism and marketing staff. About 10 years ago, the Harborfront Development Commission moved their offices into the original portion of the building and the west wing became the city’s Waterfront Visitors Center, where today it continues to showcase the past history and current status of the city’s commercial fishing operations through exhibits and videos. Trained volunteers are available at the Visitors Center to answer questions and direct individuals to various waterfront activities and services, such as ferries providing transportation to the islands of Martha’s Vineyard, Nantucket and Cuttyhunk. Therefore, the construction project of the WPA remains in use today and still serves as a place to boost interest in the local community of New Bedford.