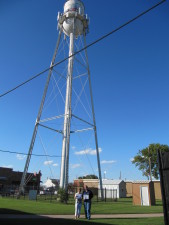 In 1934, Roanoke’s newly elected mayor applied to the Public Works Administration for a loan to build a new water system. The first contract with the federal government was dated September 18, 1934, Public Works Administration Docket #7351 for $21,000.53. The city requested more funds from the PWA from $21,000 to $22,000 in September 1935. The consulting engineer was F. J. Von Zuben from Fort Worth. The work was completed by Fort Worth contractors Shinslett and Friday.

Built during the Great Depression, the Roanoke Water Tower was the town’s primary water source. Hugh H. Jenkins, Roanoke’s first Mayor, advocated for the well and water system to help the newly-incorporated community grow. In 1934, he consolidated Roanoke’s water system under the city and applied for Public Works Administration funding, which was granted and used for the tower’s 1936 construction. Approximately 150 feet tall, the tower contains a 100,000 gallon capacity steel tank and stands on four steel legs. Though no longer in use, the tower was a vital part of Roanoke’s growth and remains a local landmark.