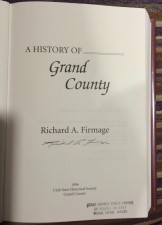 A substantial waterworks and sewer system construction project was undertaken in Moab, Utah during the Great Depression with the assistance of federal Public Works Administration (PWA) funds. The PWA provided a $32,000 loan and $13,118 outright grant to the community for the project, whose total cost was $49,391. Construction occurred between December 1934 and May 1935.

On January 4, 1934, the Times-Independent newspaper reported that the Moab water/sewer project had been approved by federal officials, which also funded the Moab public school building and Grand County courthouse.  Local voters had previously approved a bond issue in support of the project, which would share funding between the county and the federal government.  (Frimage, p. 274)