In 1929, the developer of the future Warner Mountain Ski Area, Henry Cairns, purchased the area from a man named James Strike. Cairns, having owned a farm in the area, decided to carve slopes into this mountain, located on the eastern side of East Mountain State Forest in Great Barrington, Massachusetts. The trails emptied out into Cairns farm, which became known as the G-Bar-S Dude Ranch; this stood for the nearby Great Barrington Sports.

The Civilian Conservation Corps (CCC) was employed in the area to carve two trails into the slopes: the more advanced and difficult Taconic Trail and the more accessible, intermediate Forgotten Bridge Trail. In addition, the Corps installed a series of rope tow systems to bring skiers from the G-Bar-S Ranch to the top of these trails. By the time the 1939-40 season started, two rope tows were in place, running a combined 3,000 feet up Warner Mountain. According to Ski Butternut History, the facility was the second most popular in Berkshire County with 14,500 visitors that winter season. Also during this time, a ski shop, canteen, an inn with accommodations for 45, and a parking area, and a new Adirondack lodge at the top of the mountain were built to accommodate Warner Mountain’s growing popularity. Cairns even began to adapt the trails to make them accessible in the summer.

With more and more people traveling to this section of Northwestern Massachusetts to ski, especially since Great Barrington is in such close proximity to New York State, Warner Mountain Ski Area began to expand. More trails and tows (which would be classified as the modern day ski lift) were added through 1942, with four in operation that year. In 1942, with World War II brewing, some nearby ski areas had issues with obtaining gasoline for their tows, but because the G-Bar-S Ranch operated their tows using electricity, they did not run into this problem. In the mid to late forties, trains, trams, and shuttles began transporting skiers from trail to trail and the trails were improved and revitalized.

However, Warner Mountain Ski Area was forced to change hands in the 1950s. During the 1950-1951 season, Cairns sold G-Bar-S Ranch to Jug End Barn, Inc., a ski resort at the bottom of Sterling Mountain in South Egremont, Massachusetts. In 1955, the G-Bar-S Ranch was lost to a fire and what was remaining of the ranch and the accompanying ski trails were put up for auction in 1956. After a number of failed owners, in August 1962, the area was purchased by Channing and Jane Murdock and was reopened and renamed Butternut Ski Area on Christmas Eve 1963. The Murdocks kept much of the old Warner Mountain Ski Area, including the rope tows and the Taconic and Forgotten Bridge Trails which were renamed the “Twist” and the “Fiddler”, respectively. In addition, they added new chair lifts of varying sizes and continued these types of renovations up until today.

Ski Butternut currently features 22 trails, ten ski lifts, two terrain parks, a tubing area, and a ski school. In the off-season, the mountain hosts a number of summer concerts and festivals, including the annual Berkshires Arts Festival. It is home to 110 skiable acres of land with 60% of it made up of intermediate level trails. The Twist and the Fiddler, originally cleared and created by the CCC, are still skiable today. 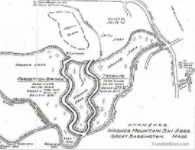