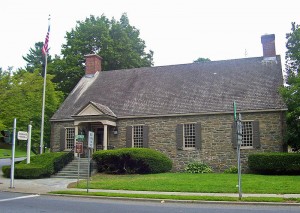 Originally the post office, this building was constructed under Treasury Department supervision during the New Deal:

“The Wappingers Falls Post Office is an architecturally and historically significant public building, deriving exceptional significance from the role that President Franklin D. Roosevelt played in its design and construction. It was among five post offices in New York State built in the regional vernacular style whose design and construction were monitored by Roosevelt. Constructed in 1939-40 in the Colonial Revival style, the post office was modeled loosely after the nearby eighteenth-century Brewer-Mesier house. Although the house was frame, Roosevelt chose fieldstone and brick as the building materials for the replica. In addition, the fenestration was also modified to accommodate the small size of the site, which is across the street from the park which contains the Mesier house. R. Stanley-Brown was selected as consulting architect, under the direction of the Office of the Supervising Architect of the Procurement Division of the Treasury Department. He had already won acclaim for his Rhinebeck Post Office design in 1938. The final appearance of the Wappingers Falls Post Office is that of a modest eighteenth-century stone dwelling of the type still extant in the Hudson River Valley. The high-pitched, gable roof is set off by large brick chimneys and brick gable ends.”