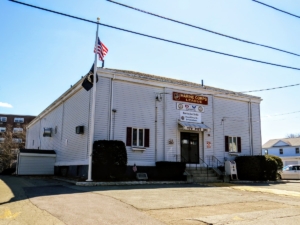 “In the middle 1800s a two-story wooden building on Stevens street, Peabody. served as a town hall and later as the city’s first high school (after Peabody became a city). But population increased as the city’s leather business prospered and the old building became inadequate for changing conditions. So it was abandoned and seemed to sadly view the passing parade of modern life.

Fidelity Post, 1011, ‘Veterans of Foreign Wars, needed a clubhouse. City fathers donated the old town hall and high school for the purpose. A WPA project built a cement floor in the cellar, adding shower baths. Two former school rooms were made into a meeting hall. Behind the first-floor meeting hall a fully equipped kitchen was installed. The building was also generally renovated and modernized, Now the vets have as cozy a club as any in the state.

On the walls hang relics of the wars of 1775, 1812, 1846, 1898 and 1917 (can you name ’em all?) and a scroll bearing the names of the world war boys who did not return.
The project was originally sponsored under ERA by the then Mayor J. Lee Sullivan and has been supervised by James L. Hughes and Joseph P. Ryan, WPA engineers.

We like the old motto ever the main entrance, i.e., “THE ORNAMENTS OF A HOUSE ARE THE GUESTS WHO FREQUENT IT.””

Project originally submitted by Evan Kalish on May 6, 2017.