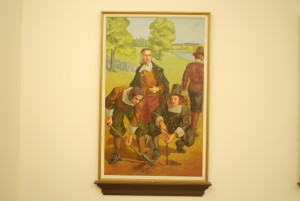 These three murals “…and 14 others were originally created as public art specifically for Danvers Town Hall. The project began in 1934 under the joint auspices of the Works Progress Administration Artist and Writers Project and the then solidly Republican Town of Danvers. Numerous local citizens, including William C. Endicott, Jasper Marsh, Lester Couch, Harriet S. Tapley, Ivan G. Smith, Victor D. Elmere, William R. Lynch and the local VFW donated cash for the materials used in the project, while the Federal WPA Administration paid the artists’ modest salaries.

Principal artist of these works of art on canvas was Richard V. Ellery, assisted by Solomon Levenson and Thomas Baker. Both Ellery and Levenson went on to be recognized as important regional artists of the 20th century…”   (http://www.wickedlocal.com)