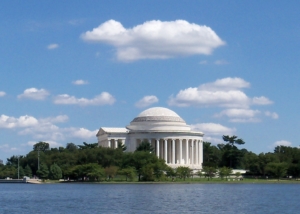 The Jefferson Memorial was built to honor the author of the Declaration of Independence and third President of the United States, Thomas Jefferson. Such a memorial had long been proposed, but it was only realized under the New Deal, 1939-1943.  It remains one of America’s most beloved monuments to this day.
The design is based on the Roman Pantheon and Jefferson’s own love of classical architecture, as shown in his design of the Rotunda at the University of Virginia. It is built of white Danby marble from Vermont and is elevated on a circular platform of granite and marble, with steps all around.  A bronze statue of Jefferson by Rudulph Evans was installed inside the memorial in 1947.
Getting the memorial built was a personal crusade of President Franklin Delano Roosevelt, a great admirer of Jefferson.  In 1934, FDR contacted the Commission of Fine Arts about the possibility of erecting a statue of Jefferson.  Soon a Thomas Jefferson Memorial Commission (TJMC) was created by Congress and $3 million were appropriated by Congress for the job. A search began for a suitable site.
The site chosen was the Tidal Basin, which had been marked for some sort of memorial by the 1901 McMillan Commission.  The McMillan Commission envisioned a grand structure to triangulate with the Washington Monument and Lincoln Memorial.
In 1937 architect John Russell Pope was selected by the TJMC  to design the memorial, but his vision proved too large and disruptive, so upon his death later that year, his associates Daniel P. Higgins and Otto R. Eggers were charged with offering a modified design.  The reduced plan kept the Pantheon design of Pope but left the Tidal Basin and its Japanese cherry trees mostly intact.  While the Fine Arts Commission objected to a Pantheon design of the Memorial, FDR overrode them, personally approved the final design, and ordered construction to begin.
Construction was carried out by the firm of John McShain, who built many of the New Deal federal buildings and monuments around D.C.

President Roosevelt spoke at the Memorial groundbreaking on December 15, 1938 and laid the cornerstone on November 15, 1939. There were fervent protests against chopping down and moving cherry trees, which FDR dismissed; yet, in fact, fewer than 50 trees were lost from the 1912 plantings.

Frederick Law Olmsted, Jr., who had served on the McMillan Commission, was made the official landscape planner for the project in 1938, with the work done by Henry V. Hubbard of Olmsted’s office.  After a good deal of back-and-forth with the architects and the National Park Service, the 19 acres of grounds were filled, landscaped and planted, and a circular access road built in time for the dedication in 1943.

FDR was again present at the dedication of the Jefferson Memorial on April 13, 1943, at which he declared: “Today, in the midst of a great war for freedom, we dedicate a shrine to freedom. To Thomas Jefferson, Apostle of Freedom, we are paying a debt long overdue.” That day was the 200th anniversary of Jefferson’s birth.
The Jefferson Memorial was listed on the National Register of Historic Places in 1966. 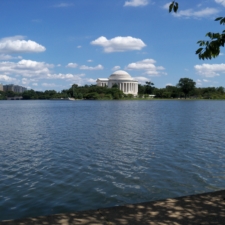