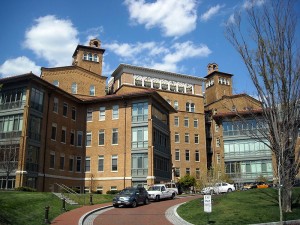 The Columbia Hospital for Women was established at this site in 1870. According to Works Progress Administration (WPA) records in the National Archives, the WPA did extensive improvements at the site in 1938, “working on the grounds, erecting fences, pointing up the masonry wall, lining coping on wall, and other  incidental and appurtenant work.”

Although the archival records only indicate that the work was approved, this project was most likely completed as described, when the WPA was very active around the District of Columbia.

The extensive brick facility is now a condominium residence called “The Columbia Residences.”

Project originally submitted by Brent McKee - wpatoday.org on May 30, 2013.
Additional contributions by Richard A Walker.