The Stuart Nursery was established in 1934 by the Kisatchie National Forest (KNF) in conjunction with the creation of the Civilian Conservation Corps (CCC). Although KNF employees managed the nursery, nearby CCC camps with 200 young men each provided manpower for its operation and field planting (Barnett and Burns 2012). Nursery seedling production was about 25 million annually with most of these seedlings shipped to CCC projects that had reforestation emphases. Wakeley’s research, now located at the nursery, took advantage of the CCC crews to apply a variety of nursery cultural practices and to establish outplanting studies. Over the 9-year duration of the CCC involvement and support, nearly three-quarters of a million tree seedlings were planted in research studies on the newly formed Palustris Experimental Forest. (USDA)

The nursery was first serviced by Camp Woodrow Wilson, Company 1476th. The first crews to begin work under Supervisor Hawthorne June 1st 1933 consisting of road and firebreak construction, telephone line construction, and fire fighting and pre-suppression. Later in September, clearing of land for the Stuart Nursery began which was the largest nursery owned by the Forest Service where 45 million trees were grown. (Fresno Dist. CCC Yearbook)

[In February 1934, construction work began on an earthen dam near Stuart Nursery for the purpose of damming the water supply for the nursery during the summer months to be distributed through 8 miles of sprinkler system. Today, Stuart Lake is a very popular spot] offering picnicking, swimming, fishing, trail hiking and biking, an open-air amphitheatre
and a separate group picnic shelter. Trails
include the Glenn Emery Hiking Trail and
2 ATV trails at the Camp Livingston MultiUse Trail System. (USFS)

The nursery was an important part of history as it provided the seedlings needed to reforest the denuded lands of Texas, Louisiana, and Mississippi. With help from the leadership of the Southern Forest Experiment Station, the CCC crews at the nursery planted 700,000 seedlings in research studies that pioneered the reforestation technology that was applied across the South. (KALB)

The Forest Service member I talked with said that that the facility is still used as a seedling nursery and that the buildings from the 1930’s are all still extant and in use. 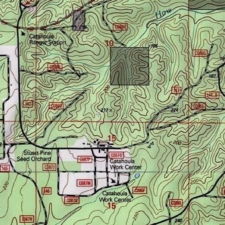 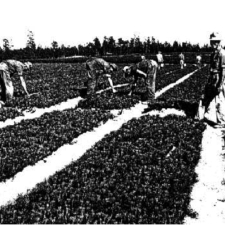 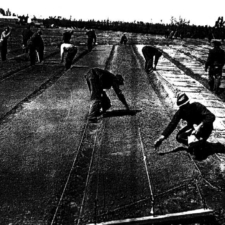